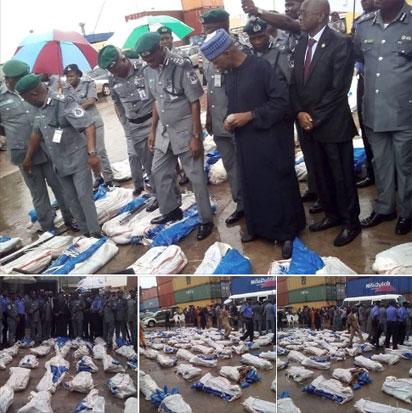 Nigerian Custom Operatives of Tin-Can Island Command, Lagos, yesterday, broke a syndicate that specialized in smuggling weapons into the country, unearthing a consignment of 1,100 pump action rifles loaded in a 20-foot container.
The weapons which were concealed in a container which Bill of Lading indicated of contents wash-hand basins and water closets, after preliminary investigations, is believed to have been imported from turkey.

However, the discovery was made during a routine check at the terminal, in which most of the supposed wash hand basins were discovered to be weapons. This is the third time  between February and September 2017 that containers loaded with weapons will be intercepted by the Customs. The first interception was in February 2017, with the recovery of 661 pump action rifles, while the second was in May 2017 when 440 pump action rifles were discovered, all traced to Turkey.

Briefing journalists on the discovery, Comptroller-General of Customs, Col. Hameed Ali (retd), said already, a Custom’s officer suspected to have cut the seal of the container without following due process had been arrested in connection with the discovery.

According to him, a clerk at the terminal was arrested alongside the officer. Ali explained that the container with number GESU 2555208, which was never listed for examination,  was discovered to have been positioned with other containers for examination. On further observation, Ali disclosed that the seal on the container was discovered to have been broken, indicating that it was positioned for examination.
Meanwhile, tongues are beginning to wag on the fact that the weapons are traced to Turkey against the backdrop of their recent commitment to the leader of the IPOB Nnamdi Kanu.