HomeTHE NATION13 Nigerian soldiers killed, dozen others injured on stepping on a landmine...
THE NATIONNEWSOTHERS 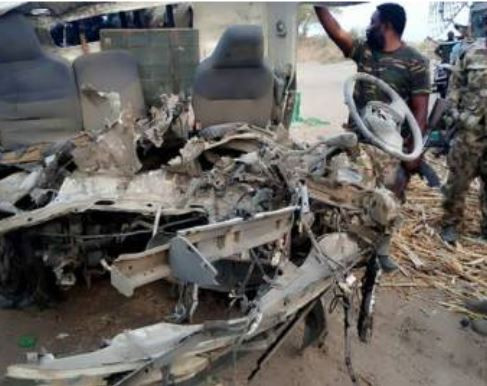 At least 13 soldiers have been confirmed killed and an unconfirmed number of them severely wounded in Borno State on Monday when they stepped on a landmine planted by Boko Haram.

According to a report by SaharaReporters, the soldiers were moving along Gwoza-Yamteke Road in Gwoza Local Government Area when a military operational truck stepped on an Improvised Explosive Device (IED) buried underneath the road and destroyed the truck beyond repairs.

SaharaReporters saw photos of the shattered bodies, as proof of the attack, but they are too gory for public viewing. The Army, though, has not publicly commented on the incident. Boko Haram insurgents have recently stepped up their attacks in the southern part of Borno.