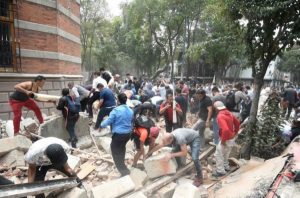 It was a DOUBLE TRAGEDY from nature on Tuesday for Mexico as it  did not just have a fresh earthquake to contend with, but also  the problem of the small eruption of Popocatepetl volcano.

In Atzitzihuacan on the slopes of the volcano, a church collapsed during mass, killing 15 people, Puebla Governor Jose Antonio Gali said.

This is in addition to the 149 people who  died when a powerful earthquake of magnitude 7.1 struck central Mexico, toppling buildings in the heavily populated capital where rescuers scoured frantically under the rubble of ruins for survivors.

Thousands ran into the streets in panic, and millions lost electricity when the quake struck around noon.

meanwhile 22 children were among the dead.