The presidential candidate of Peoples Party of Nigeria (PPN), Hamza Al-Mustapha, has also blamed the Nigerian Military for his failure to present and submit academic credentials to the Independent National Electoral Commission (INEC).

This comes after President Buhari said his certificate were still with the Military after it was taken during the regime of Ibrahim Babangida.

All the aspirants seeking elective positions in the country are expected to submit certain documents, including their academic credentials to INEC.

But Al-Mustapha, a retired major in the Nigerian army, told the commission his documents were in possession of the military.

In his particulars submitted to the commission, Al-Mustapha said the military has “refused” to release his academic certificates, despite court orders asking them to do so.

He said: “I was a victim of persecution for 15 years over deliberate trump of charges. I was, however, exonerated and freed of the wanton charges vide court of appeal ruling on 12 July, 2013.

“My entire personal documents including my certificates and awards were taken by the then government in 1998.

President Muhammadu Buhari also failed to submit his academic credentials, saying they are with the military.

2019: I’ll retire Buhari to Daura  – Atiku fires back at Oshiomhole 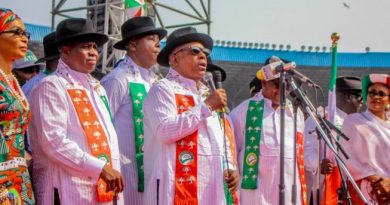