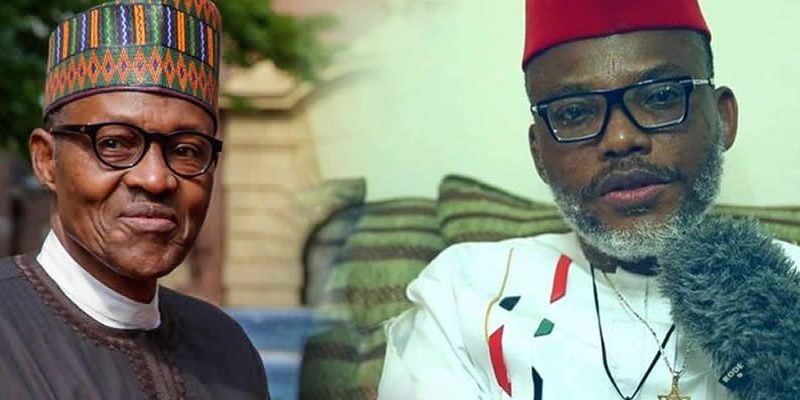 The leader of the Indigenous People of Biafra (IPOB) Nnamdi Kanu, , has slammed the Peoples Democratic Party (PDP), for attacking him over his claim that Atiku Abubakar was from Cameroon.

Nnamdi Kanu also insisted that President Muhammadu Buhari was dead and has been replaced with Jubril al Sudani fron Sudan.

He maintained that he was not for any political party, describing anyone thinking otherwise as twisted, perverted and ignorant.

Kanu stated that “every political party in the zoo are all Fulani owned. Fulani conquered Hausa and Hausa helped them to conquer parts of Yorubaland as such, we IPOB don’t have any business in zoo presidential elections.”

“When I said Buhari was dead and replaced by a double, an imposter, Jubril al-Sudani from Sudan, Lai Mohammed and APC machinery said Nnamdi Kanu has been bought over by PDP, he is working for the opposition and has been paid millions of dollars to disparage and smear the name of Mohammadu Buhari and ridicule Nigeria in the eyes of international countries.

“Now that I have said the simple verifiable truth that Atiku Abubakar is a Cameroonian by birth but became a Nigerian by Choice (Referendum), PDP are up in arms saying Nnamdi Kanu signed a pact with the APC led Federal Government and is working for APC to deplete the votes of South East whilst he’s far away in London.

“These PDP e-rats and their Alimajiri APC counterparts remind me of the stupefying ignorance of Jihadists all over the world.

“When you catch them perpetrating their usual atrocity they tell you its Israel and the West sponsoring terror attacks against their own citizens. They never confront the truth starring them in the face. How twisted, perverted and ignorant they are.

“It was this same Atiku they are dying for today that joined the same late Buhari they want IPOB to vote out to chase Jonathan out of Aso Rock. How many times will a Fulani rule Nigeria?

“How many times will people allow Fulani only presidential candidates? What type of god created these PDP e-rats? I asked a question on my page which nobody has been able to answer to date.

“What do you think other Nigerians will say, especially Yoruba, if Apapa Wharf and Tin Can Island were shut down and every maritime trade moved to Calabar and Igweocha?

“Do you think Fulani caliphate will allow another ethnic group to rule Nigeria the same number of years as themselves?

“What did these e-rats do when IPOB was labelled a terrorist group or you have all forgotten?

“Our boycott started since 2014 when Atiku joined Buhari in APC to humiliate Jonathan out of office. If this wretched band of e-rats weren’t able to remove certificateless dead Buhari, what can they do to IPOB.

“We shall teach them a lesson they will never forget. They came to fight IPOB because I spoke the truth. If they invest all the money they stole while in government in a media war against IPOB, they will end up losing it.

“If the might of the Nigerian state and international media conspiracy could not defeat IPOB, how much less this band of self loathing reprobates.

“They may have learnt.”

APC C’ttee On Restructuring Acceded To The Request Of Nigerians As Its Recommends State Police, State Resource Control, Others | Trait News