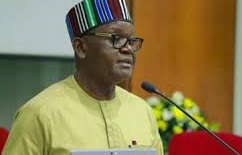 Samuel Ortom, Benue State Governor has warned that Peoples Democratic Party, PDP may not make progress in next year’s election if the party ignores the demands put forward by the five Governors elected on the platform of the party.

Ortom spoke, Tuesday, during the inauguration of the PDP State Campaign Council and Campaign Management Committee at the party’s State Secretariat, Makurdi.

“It is not possible for us as a party to move forward without resolving the issues that I and my other colleagues are raising. These are the issues creating some challenges in the PDP. We must therefore come together as a team and work to resolve them.

“I want to assure you and all Nigerians that if our PDP Presidential candidate is able to come out in sincerity and open up and resolve those issues, we shall work together. I am in PDP and I am working for the PDP and all our candidates from bottom to top.

“But we do not have issues with the candidates of the party. And so I call on the national leadership of the party to rise to its responsibility and listen to the voice of reason and deploy its conflict resolution mechanism and resolve all the issues so that we can work as a team as we move into 2023,” he said.

Governor Ortom insisted that “Those people who say that five Governors do not matter, I disagree with them. It is impossible for PDP to win an election in this kind of massive conflict that we have in our party and most of these Governors that we are talking about, they are PDP States who won election including Benue State for the PDP. So there is no way you can dismiss the issues that are being raised by the five Governors.”

“For all that I and my colleagues stand for, let there be a committee of the whole house to look at these issues and discuss frankly and resolve them amicably, if not there will be a challenge. But for us in Benue State here, we have no issue, we have all said it, the candidates have said it. We are PDP, Benue State is PDP, but if the issues that the five Governors are raising are not resolved, I cannot guarantee what will happen at the national level. But I want my party to win and this is all that I have to say,” he stated.

Speaking further on the lingering crises, Governor Ortom maintained that “Benue State remains PDP and PDP remains Benue State. No amount of intimidation, no amount of evil treatment or anything that can turn us away from PDP. We remain committed to PDP.”

He said that despite the internal crisis in the PDP, some of them love the party and want Nigeria to be liberated where there will be equity, fairness and justice, stressing that “it is PDP that can provide all these.”

Governor Ortom described Engr. Titus Uba, the PDP gubernatorial candidate as “A seasoned engineer, a man of impeccable character and a man without blemish,” saying, this is a man that you should trust.”

He also announced the donation of 25 buses to the state chapter of the party the Rivers State Governor, Nyesom Wike to boost the campaigns, saying it would strengthen the PDP in the forthcoming polls.

The PDP Governorship candidate and Speaker, Benue House of Assembly, Engr Titus Uba in a remark expressed optimism about the victory of the PDP, stating that the party was poised to win all its elections.

Acting State Chairman of the PDP, Hon Isaac Mffo noted that the party was waxing stronger and united in the state because of Governor Ortom’s inclusive leadership and transparent primaries that were done, emphasising that the party will prioritize taking the correct approach by involving all members down to the polling units to achieve victory at the polls.

The Director of the State Campaign Council, Dr Cletus Tyokyaa in his remarks, stated that the team will evolve strategies for the party to win all its elections in the state, stressing that the cream of people on the team were committed to the victory of the party’s candidates.

PDP Board of Trustees member, Mrs Margaret Icheen, Patrick Ogbu for former governorship aspirants, Julius Atorough for National and State Assembly candidates as well as Dr Torngee Jem-Toranyiin, Hon Mike Mku, Sir Moses Ajima for the three Senatorial districts in the state in separate remarks expressed readiness to work for the victory of the party at the 2023 polls.

Others, who gave goodwill messages, were the representatives of the youth, Johnpaul Uttuh and the State Woman Leader, Abege Egwa.