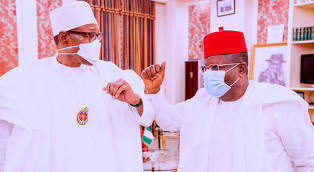 Governor David Umahi who had a closed door meeting with Buhari today, told state house correspondents that the President advised him to consult widely.

Umahi’s visit to inform the President of his presidential ambition is coming exactly 24 hours after a national leader of the All Progressives Congress (APC), Asiwaju Bola Tinubu, paid a similar visit to President Buhari. 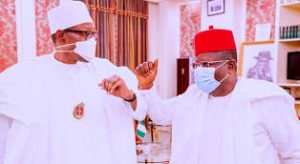 After meeting Buhari behind closed doors, the governor informed journalists that he notified the president of his intention to contest the presidential election.

He said Buhari told him to consult widely and seek the support of the people ahead of the elections.

The Ebonyi governor equally said he was not bothered by Tinubu’s presence in the race for the All Progressives Congress (APC) presidential ticket.

Tinubu is regarded as the national leader of the APC and is believed to be highly favoured to emerge the party’s presidential candidate.

In the interview with journalists after the meeting with Buhari, Umahi expressed  readiness to replicate his achievements in Ebonyi State at the national level.

He said he would bring a business-like spirit into governance.

Governor David Umahi was elected governor of Ebonyi State on the platform of the People’s Democratic Party (PDP) in 2015 but defected to the APC in 2020, after he was reelected for a second term in 2019.

He is the chairman of the South-East Governors Forum.

With Governor David Umahi’s declaration of intent to contest the presidential election, the APC now has three aspirants who have openly expressed the intention to seek the party’s ticket for the 2023 poll.

Kogi State Governor Yahaya Bello was the first to express his intention to emerge the presidential candidate of the ruling party.

Bello announced his presidential ambition in June 2021 when he declared that he would give a positive response to Nigerians, including youths, women and ‘very objective elite’ who he claimed were asking him to run for president in 2023.