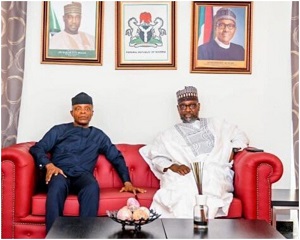 The meeting lasted over two hours at the Niger state Presidential lodge near the Government House where he was received by Governor Sani Bello.

The visit was without the usual visit to the All Progressives Congress, APC, party office nor to the two former Nigerian heads of State General Ibrahim Badamasi Babangida and General Abdulsalami Abubakar at their Uphill country homes.

Osibanjo arrived at Minna International Airport at about 3 pm and was driven to the lodge and had his lunch with his host and thereafter, ushered into one of the rooms at the Lodge for a closed-door meeting with only the Governor.

The Vice President arrived at Minna International Airport at about 3pm and was driven to the Presidential lodge near the Government House where He was received by the state Governor, Alhaji Abubakar Sani Bello.

After taking his lunch, the Vice President was ushered into one of the rooms at the Lodge where he had a closed-door meeting with only the Governor which lasted for over two hours.

Efforts by journalists who had besieged the Lodge and waited for hours to interview the vice president after the meeting failed.

He shunned them and was ushered straight into a waiting car and was driven to the airport back, leaving the journalists disappointed.

Governor Sani Bello was not also forthcoming on the purpose of the visit by the VP to the reporters.