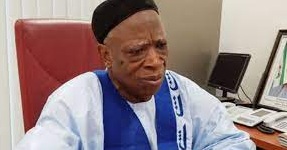 ABUJA – The National Chairman of the All Progressives Congress (APC), Abdullahi Adamu, has stated that the party chose a vice-presidential candidate after “careful” legal consultations.

Adamu stated this on Monday while speaking with State House correspondents after accompanying the Governor-elect of Ekiti, Biodun Oyebanji, on a visit to President Muhammadu Buhari.

Although the ruling party has not officially confirmed if Masari is a placeholder or not, there have been speculations on the possibility that he may not want to step down if he is indeed standing in as Tinubu’s running mate.

Speaking on the development, Adamu said: “We are not in the speculative world. We are governed by the laws of the land. There’s nothing our presidential candidate has done with regards to returning his forms that is not within the confines of the law of the land.

“Everything we’ve done so far, we have done very carefully with legal consultation and we are cocksure, we’re not going to have the kind of speculation that you are professing at this point in time.

“We’re very comfortable with what we have done. It is still pessimism. However, not in that school of thought yet. We don’t have to be there.”