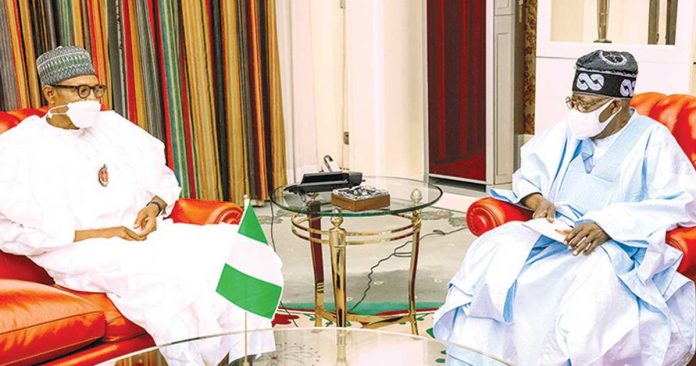 The national leader of the All Progressives Congress (APC), Asiwaju Bola Tinubu, yesterday, formally announced his intention to run for the country’s number one office in 2023, confirming that he has informed President Muhammadu Buhari and Vice President Yemi Osinbajo of his ambition, Trait News reports

He disclosed this to journalists after a closed-door meeting with President Buhari in Abuja on Monday.

In an interview with State House reporters, Tinubu said it has been his life-long ambition to lead the country one day.

According to him: “I have informed the President of my ambition but I have not informed Nigerians yet, I am still consulting. There’s nowhere in the world where a kingmaker cannot himself be king.”

The APC national leader added that he plans to actualise his ambition under the platform of the ruling APC, noting that with what he did in Lagos in his time as governor, he has the capacity to lead Nigeria.

“You will soon hear. All you want to hear is the categorical declaration. You’ve gotten that truth from me that I have informed Mr. President of my ambition, and you don’t expect more answers than that,” he said.

He shrugged the question of a potential race for the APC ticket between him and Vice President Yemi Osinbajo, whose support groups have since begun mobilising for his candidacy. On Osinbajo’s potential ambition, the APC national leader maintained that he would not be drawn into any discussion on any individual.

Tinubu said: “I don’t want to discuss individuals now. I must discuss myself. I have the confidence, vision and capacity to rule, build on the foundation of Mr. President, and turn Nigeria better. I’ve done that before in Lagos State. You’ve seen that experience and the capacity to turn things around and that is what we are doing.”

Answering a question on President Buhari’s response, Tinubu said: “That’s our business. He is a democrat. He didn’t ask me to stop. He didn’t ask me not to attempt and pursue my ambition. It is a lifelong ambition. So, why do I expect him to say more than that?

“You are running a democratic dispensation, and you must adopt the principles and the values and the virtues of democracy. That’s it.” On the Electoral Act Amendment bill and what Nigerians should expect, Tinubu responded thus: “You want my manifesto now? Not yet. Not yet.”

“First of all, the National Assembly and the President must be encouraged to review and review again. Whatever they come up with electoral amendment is what we must comply with. There is no unlimited elasticity in what we face, because we have to plan and plan well, and be able to manage the time effectively.”

“The great roadmap to success is the ability of a leader to do what he must do at the right time that has to be done. So, to me, we will still look at the amendment bill collectively. It is our country. It’s our democracy. We had adopted it and we will push it rigorously.”

The former Lagos State governor said as a bonafide citizen, he was in the State House, Abuja, to also discuss a number of other national issues, including security.

“I have not lost my citizenship. I came to see the President on general issues concerning Nigeria, including our political party, APC, security issues and the New Year agenda. That’s all I can tell you.”