HomePOLITICS2023: ‘We won’t support your Presidential ambition’ – Obaseki fires back at...
POLITICS

2023: ‘We won’t support your Presidential ambition’ – Obaseki fires back at Wike 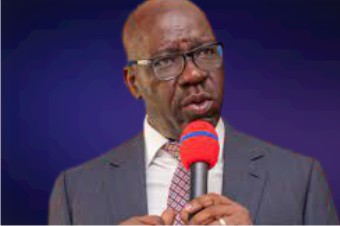 The Edo State Governor, Godwin Obaseki has warned his Rivers state counterpart, Governor Nyesom Wike against resorting to bullying members of the Peoples Democratic Party, PDP, as a strategy for his 2023 presidential ambition.

in a statement, Obaseki said Wike can’t threaten or cajole PDP in Edo State into supporting his presidential ambition. Obaseki was reacting to Wike’s scathing attack on his Deputy Governor, Philip Shuaibu.

He said this in an advertorial on Monday, which reads: “The recent personal attacks by His Excellency, the Governor of Rivers State, Nyesom Wike, against my Deputy Governor. Rt. Hon. Comrade Philip Shaibu is, to say the least, most unfortunate and totally uncalled for.

“My deputy governor was a former National President of the National Association of Nigerian Students and his comment is representative of the essence of the nation’s youth population, who are inclined to openly speak up and question the status quo.

“If Governor Wike cannot understand and adequately respond to the style and character of the Nigerian youth, how can he aspire to lead them?

“Governor Wike and his collaborators headed by Chief Dan Orbih in Edo State will not succeed in destabilizing the PDP in Edo State as they did other States like Cross River, just to secure delegates to actualize his alleged personal ambition to run for presidency in 2023.

“In Edo, we don’t accept political bullies and overlords and historically, we have demonstrated our capacity to unshackle ourselves and dethrone bullies and highhanded leaders.”