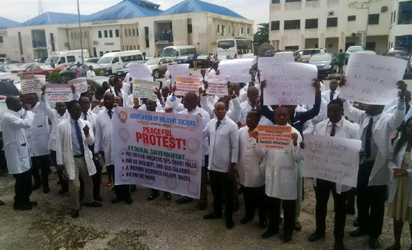 LAGOS— within a week after the National Association of Resident Doctors, NARD, called off their 10-day strike, public hospitals nationwide are now facing another imminent shutdown as all the major unions of health workers under the umbrella of the Joint Health Sector Unions, JOHESU, yesterday, embarked on indefinite strike.

the union threatened to shut down operations in public hospitals due to the prolonged delay by the Federal Government in meeting their demands dating back to 2012.

Comprising  unions of nurses, laboratory scientists, physiotherapists, among others, that make up about 95 per cent of health workers and care providers in the health sector, JOHESU had earlier issued a seven-day ultimatum and declared a nationwide industrial action that it tagged Operation Alligator Bite.

some of their demands include revamp of infrastructure in the tertiary health institutions; report of the inter-ministerial sub-committee on critical matters in the health sector and professional autonomy. Others include non-payment of backlog of arrears, residency training; appointments of consultants and payment of specialist allowance; and implementation of the National Health Act, among others.

Prior to the strike declaration, JOHESU and the Assembly of Healthcare Professionals Associations, AHPA, had urged the Senate President, Dr Bukola Saraki, and  Speaker of the House of representatives, Yakubu Dogara, to wade into the lingering crisis.