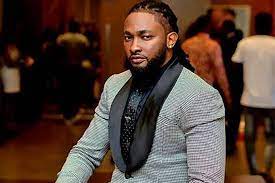 Nollywood actor and former Big Brother Africa winner, Uti Nwachukwu, on Tuesday lamented the use of chemicals in bottled water as he narrated his ordeal after ingesting bottles of water.

The reality TV star took to his Twitter page to blame his incessant stooling on the amount of chemical contained in the table water he ingested.

He also called out the companies to “fix” the problems or he’d be forced to call them out.

Uti Nwachukwu wrote, “Dear bottled water companies, please what have you started adding to your water? If I wanted to projectile poop six-seven times a day, I’d have bought slimming tea!

“What’s all this? It can’t be only me! And it’s the biggest brands! Two of them now! Fix it so that I don’t call your names!

“I knew there was a problem when I was pooping steady and it was smelling of chemicals, like sanitizer, or alum or something! I stopped the first one and the stooling ceased.

“Took the second one and there were no issues. I bought a small bottle and it was worse! This one came with abdominal discomfort, acid reflux, and yes, watery stool with that same chemical/alum aroma.