Air Astana and Embraer are embroiled in legal battle 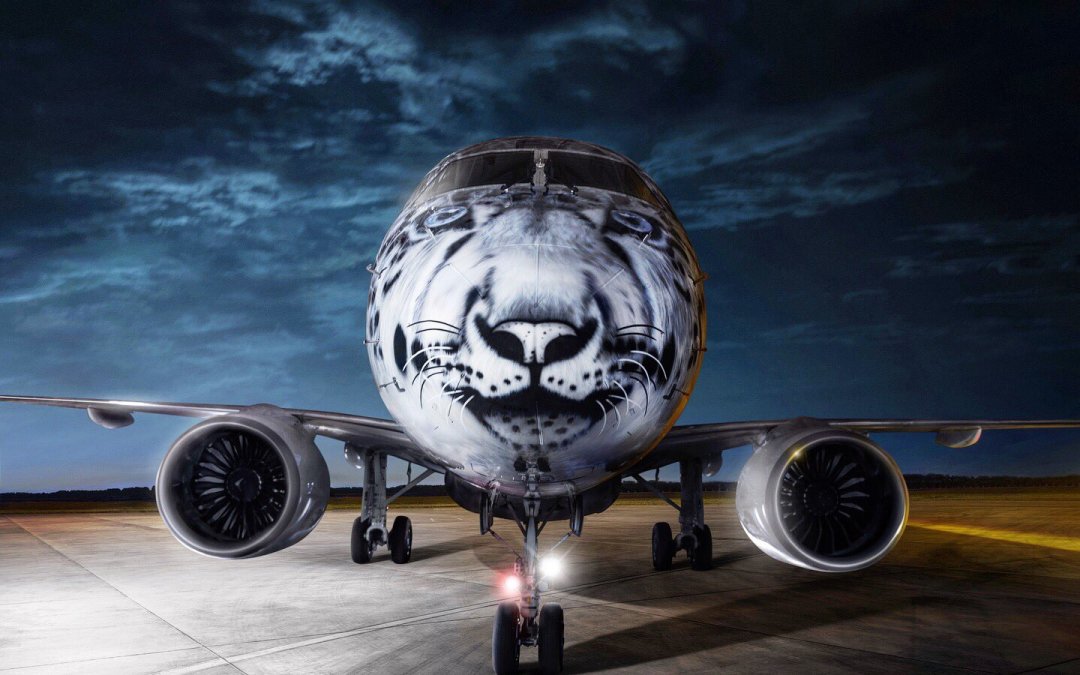 Air Astana and Embraer are embroiled in legal battle. The national carrier from Kazakhstan has filed a lawsuit against Embraer with the Supreme Court of New York State on July 2. It seeks compensation for at least $12 million in costs related to warranty and quality issues with its five E190-E2s. Embraer denies the allegations.

Air Astana became one of the first E2-operators when it took delivery of its first E190-E2 on December 1, 2018. The aircraft with the striking snow leopard nose was leased from AerCap. Four more followed until November 1, 2019. All aircraft are on six-year leases, with terms and conditions dating back to lessor ILFC before it was bought by AerCap. The airline operates the aircraft on domestic and regional routes from its Almaty base to often remote airports in rugged areas. From 2011 until April 2020, Air Astana has been an E1 operator as well.

In February 2019, Embraer announced that Air Astana had reached a multi-year agreement of a flight hour pool program for technical support and full repair coverage on over 325 components “to ensure high fleet availability.” The support of the OEM “was fundamental in our decision to join the program”, Air Astana CEO Peter Foster is quoted in the press release. 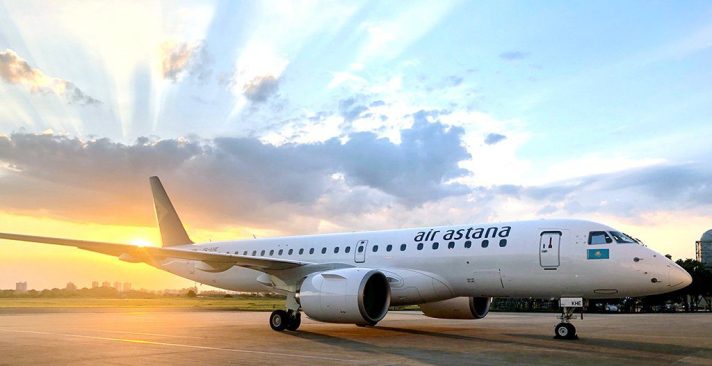 The fifth and final E190-E2 for Air Astana joined the airline in November 2019.
This aircraft remains grounded. (AerCap)

Two years on, and there has been a fall-out between the airline and airframer. In a 62-page document filed at the New York Supreme Court, the three attorneys of Latham & Watkins detail a range of technical issues that beset Air Astana’s E2 operations. They even forced the airline to ground the five E2s. Although the plaintiff says this continues to this day, on July 4 only two remain grounded. The first two that were delivered have been back in service in the past week, while E2 number 4 (P4-KHD) did a test flight right today.

Air Astana says that it has experienced “multiple in-flight software and mechanical failures that critically undermine the aircrafts’ airworthiness.” The document mentions a number of Engine-Indicating and Crew-Alerting System (EICAS) alerts for the anti-icing system, latched bleed-air valves, and as a consequence dropping cabin pressure.

The carrier claims that the bleed-air valved became latched as a result of a software (AMSC) issue that Embraer was aware of: “Embraer knew about the flaws in the AMSC and was actively working on a software update to address them. But it had not warned Air Astana or other E2 customers about the flaw, or its potential implications.” And when Embraer issued a Service Bulletin, it was an advisory that was merely desirable and not a compulsory measure, the airline states: “Embraer subsequently sought to mask the gravity of its failings.”

The E2s also experienced 23 cabin smoke alerts that resulted in flight diversions, only to find out that these alerts had been false. “It took Embraer two years (until February 2021) to confirm that the root cause of the warnings on the ground was “dust” and to issue a solution”, the plaintiff says.
Another issue happened on three flights in 2020 when the aircraft made un-commanded pitch down and pitch up maneuvers. On six occasions, the wings slats didn’t respond to pilot input and forced the crew to go around.

There were also alerts for low pressure in the number 3 hydraulic system during a flight in November 2020, causing a sequence of EICAS-alerts of potential system failures, overloading the crew. The root cause was later suspected to be the failure of an alternating current motor pump (ACMP) number 3.

The document adds that Embraer “later learned that the E2’s ACMP is subject to excessive tail-bearing wear, causing premature failures and consequent degradation of the aircraft’s electrical system through a shut-down of the combined hydraulic transmission and alternating current generator, the Integrated Driver Generator #2 (“IDG2”).” The ACMP fails to meet 2.700 flight hours until maintenance and when it fails, it destabilizes the electrical system. 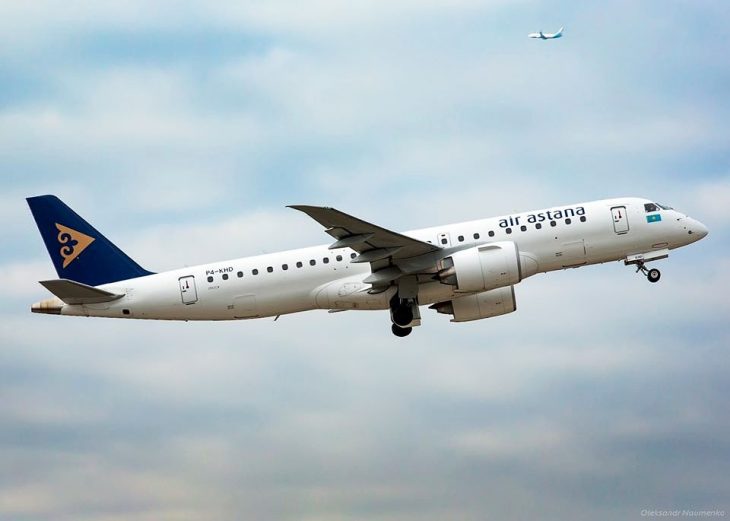 Air Astana adds another complaint here. It purchased the E2 on the belief that its systems would be identical to that of the E1, of which the carrier was an experienced operator. The plaintiff says that “Embraer’s conduct in this regard is emblematic of two standard Embraer tactics: it has consistently sought both to minimize the significance of the myriad E2 design and mechanical flaws and to delay meaningful fixes to those flaws. The former exposes all E2 customers to needless safety risk; the latter directly and proximately caused the significant and ongoing suspension of E2 operations by Air Astana.”

It continues: “After months of minimizing the severity of the ACMP3A issue to its customers, Embraer was forced by its home-country regulator to address it. The National Civil Aviation Agency of Brazil (ANAC) recently issued an Airworthiness Directive that both confirms an increased probability of ACMP3A failures in the E2 and recognizes the potential for those failures to “affect [the E2’s] electrical power distribution system. (…) The findings and directives of the National Civil Aviation Agency of Brazil make clear that Embraer’s suggested solution to the ACMP-related issue was, at best, grossly negligent and reckless.”

In December 2020, Air Astana had enough of the issues and grounded its E2-fleet on the 15th. “Air Astana conducted extensive internal reviews and engaged industry-leading external consultants to review the incidents described above. The external consultants concurred: the E2s could not be operated within accepted norms of safe flight, and the aircraft needed to stay on the ground until Embraer fixed the problems of its own making.” The plaintiff states that the “E2 was not airworthy or should have been known to Embraer.” Kazachstan’s Aviation Administration said in May that the airline’s decision was “prudent given the level of concern generated.”

The airline informed Embraer a week earlier when it requested that the OEM would address all technical issues and demonstrate a clean “bill of health” that the E2 is airworthy. And the carrier requested that Embraer for breach of contract reimburse “in full for all losses, costs, and expenses directly suffered by Air Astana as a result of the failures that forced Air Astana to suspend operations of the E2s.” These costs have been calculated to be around $12 million and include lease payments to AerCap for grounded aircraft, maintenance, and the sourcing of replacement aircraft. Air Astana says that AerCap has assigned all of Embraer’s warranties of the E2 to the airline, although it includes a limitation that obliges Embraer to only replace or repair defective parts.

Embraer has no intention to compensate

The document says that “Embraer has stated that it does not intend to compensate Air Astana for any losses directly resulting from the suspension of the E2s.” This position has made it impossible to prevent a legal battle.
In its own statement, the Brazilian airframer “denies it has breached any obligations to Air Astana and will vigorously defend against all claims asserted.” It adds that no other E2-operator has grounded its aircraft since introducing the type into its fleet.

The statement only refers to one specific technical issue mentioned in the plaintiff: the hydraulic issue on November 9, 2020. Embraer says that “at no point did this constitute an immediate safety risk and the aircraft landed safely.” It says the incident was brought to the attention of the component supplier and Brazilian regulator ANAC and the issuance of an Information Bulletin to other airlines, setting a reduced replacement time for the hydraulic pump. This has been followed by an Airworthiness Directive from ANAC. 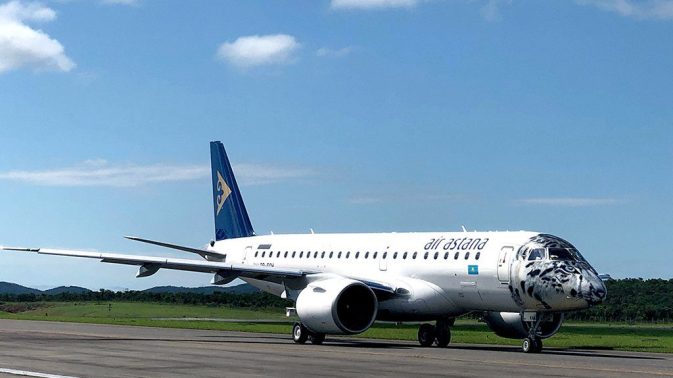 Airinsight can confirm that ANAC indeed issued an Airworthiness Directive on May 12 for what is officially the ERJ190-300 and -400 to address premature failures of the ACMP3A pump. The AD requests repetitive replacement of the pump every 2.700 flight hours. The agency is considering further action.
Another AD from February 23 addresses notifications from the smoke detection systems and requests airlines to temporarily modify the airplane flight manual procedures in the event of alerts on the EICAS system while at the same time requesting the modification of the electrical wiring of the mid electronic bay and backup smoke detectors. The crew is still advised to land at the nearest available airport.

Embraer concludes its statement by saying it has a “reputation for going ‘above and beyond’ in service to its customers, and the company has already dedicated many resources to Air Astana. Nonetheless, Embraer looks forward to presenting its case in court.” No date has been set yet. Until then, Air Astana and Embraer are embroiled in a legal battle.