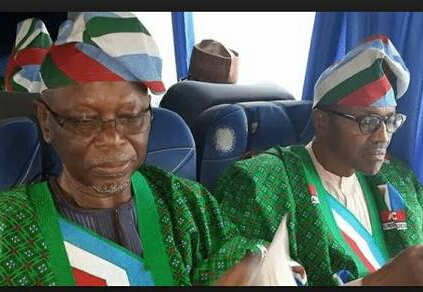 The national chairman of the All Progressive Congress (APC), John Oyegun has reacted to a statement made by prominent APC Chieftain Bisi Akande that APC’s Presidential ticket for 2019 is open for everyone.

While speaking to Thisday newspaper Oyegun said that this is Chief Akande’s personal opinion and has no bearing on the party’s point of view. It had been believed before this that President Buhari would get first refusal privileges on a Presidential ticket, but Chief Akande’s statements seemed to hint at the possibility of a Presidential free-for-all.

According to Thisday, however, the statement caused a ruckus especially among the South-west faction of APC who were unhappy with Akande’s statements which they feel will cause unnecessary fissures in the party.

“That didn’t come up at our meeting at all.” said a Governor at the meeting which precluded Akande’s statements. “It was just a question asked him by a journalist and he answered off-the-curve. Everyone is angry now. The only thing we discussed was what was in the communiqué read by Governor Ajimobi and essentially the meeting was about restructuring.

“What we said at the meeting was that the word restructuring is not in our manifesto. What is there is that we would initiate a process that would lead to a bill or an act that will define the governance structure of the country. So, basically, we insisted we never used the word restructuring.

“So, that should be it as far as the meeting was concerned. But he really embarrassed us and we didn’t expect it from him, although it must have been inadvertent because when he was asked after the interview, he said the question was on the spot and that he just gave an on-the-spot answer. Everybody is really angry now and sadly, he is President Buhari’s number one fan. So, I don’t know where this came from,” the governor said.

“He has a lot of respect for Chief Akande and they get along really well. But as it is, we may have to salvage this situation with one of us coming out to address the issue more pointedly,” he added.