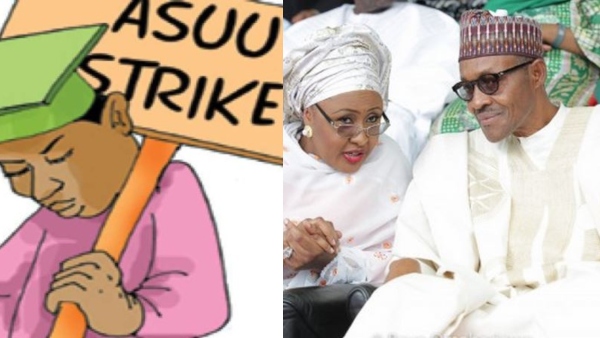 The Academic Staff Union of Universities (ASUU) on Tuesday slammed the Federal Government and Aisha Buhari, over the proposed plan to establish a private university to be named after President Muhammadu Buhari.

ASUU who slammed Aisha Buhari, further described the proposed university by the wife of President Buhari as a disaster.

According to the union, the plan of the wife of the President to establish a new university confirmed why her Husband continued to reduce budgetary allocation to education since he assumed office in 2015.

Chairman of the union, University of Ibadan chapter, Professor Deji Omole and a former National Treasurer of the Union, Professor Ademola Aremu who spoke in separate interviews with newsmen in Ibadan, all berated the First Lady over the proposed move.

Omole said: “When I heard about the proposed private university to be named after Mr President, I just looked at it as a joke taken too far. If we have a president in a country that has simply refused to fund public education and all we get from the first family is to establish a private university in collaboration with some foreigners, it is a disaster for this country and for a sitting president.

“The implication is that Nigerians should know that this leadership does not believe in public funded education”.