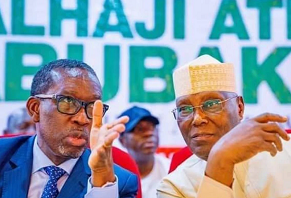 Paul Ibe, Media Adviser to the presidential candidate of the Peoples Democratic Party, Atiku Abubakar has refuted allegations that his principal planned to travel to Europe for medical care.

Ibe claimed that barring any last-minute change, the former Vice President will travel to Europe on a personal business trip.

A statement by Ibe said his principal would be travelling immediately after his meeting on Friday in Lagos, with the leadership of the Pentecostal Fellowship of Nigeria (PFN) alongside the PDP vice presidential candidate, Governor Ifeanyi Okowa of Delta.

Mr Ibe explained in the statement that “Today’s trip is in continuation of an earlier business trip of 3 weeks ago.”

He said, “At the conclusion of his European trip, the former Vice President will also use the opportunity to visit his family in Dubai.”

The Media Adviser stated that Atiku’s trip is for business and family purposes and has nothing to do with medicals as being insinuated in some quarters.

Recall that the platform on which the PDP presidential flag bearer will be running for the top seat in the land constituted its campaign council recently, appointing the Akwa Ibom State Governor, Emmanuel Udom as leader of the team.

This is coming despite the initial announcement by the Independent National Electoral Commission, INEC, that campaigns for the 2023 general elections will kick off on September 28.