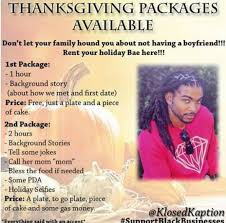 “Don’t let your family hound you about not having a boyfriend!!! Rent your holiday Bae here!!!,” the opening line for a hilarious viral advert reads.

report has it that though the ad sounds like a joke, it’s pretty real because the man shared his Twitter handle so he can be contacted by interested women. As though the ad was not hilarious enough, he revealed the price for his services and they are bound to leave you in stitches.

He offers two packages and both have different prices. He ended the advert by asking people to #SupportBlackBusinesses.