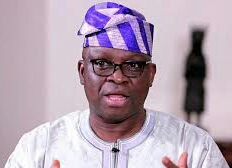 Ekiti State Governor, Mr Ayodele Fayose has said that he was not surprised by the comment from the President of the World Bank Group, Jim Yong Kim that President Muhammadu Buhari directed specifically that the World Bank should shift its focus to the northern region of Nigeria, maintaining that “the President has never hidden the fact that he is a sectional leader and painfully, because of his nepotism, religious bigotry and favouritism, Nigeria is now more divided than ever before, with the unity of the country being threatened.”

The governor, who spoke through his Special Assistant on Public Communications and New Media, Lere Olayinka, asked; “Is the comment from the World Bank President different from the 97 percent/5 percent formula of President Buhari?”

He said; “When a President open his mouth and say that constituencies that gave him 97% votes cannot in all honesty be treated, on some issues, with constituencies that gave him 5% votes, lovers of unity in the country should have raised the alarm and alerted the world of the danger of having a nepotistic president, and I warned then but other Nigerians that should have raised their voice, kept mute.”

Governor Fayose, in his reaction said; “Once again, the fact that President Mohammadu Buhari is an ethnic champion, a religious bigot and the number one promoter of disunity in Nigeria was brought to the fore by the President of the World Bank Group, Jim Yong Kim.

“Nigerians should be reminded that on August 15, 2015, less than three months in Buhari’s government, I raised the alarm that he (Buhari) was operating as a president of the Northern Nigeria only. Then, I described steps taken by the president since May 29, 2015 as tainted in ethnic and tribal colouration and inimical to the unity of Nigeria.

While reminding Nigerians of his earlier warnings that Buhari was a sectional leader, Governor Fayose said; “Those politicians, who painted the picture of a changed President Buhari to Nigerians before the 2015 presidential election, should remember that I warned that he (Buhari) can never change from an ethnic champion to a nationalist.

“As a Military Head of State, Buhari cancelled the Lagos Metroline Project at a loss of over $78 million (then) to the Lagos tax payers. For terminating the contract, $500 million, which was almost enough to complete the project, was paid as fine to the foreign company handling the project.

“Would Buhari have stopped that project that would have resolved the transportation nightmare Lagosians are facing today, if it were to be in Kano?

“When Fulani herdsmen were killing Nigerians in the South and North-Central states of Benue and Plateau, President Buhari, who is the Patron of Miyetti Allah Cattle Breaders Association simply kept mute.Not even the killing of over 1,000 Agatus in Benue State got the attention of the President.

“The same President Buhari, who led a delegation of Arewa leaders to Ibadan on October 13, 2000, to confront the then Governor of Oyo State, Late Alhaji Lam Adesina over alleged killing of Fulani Herdsmen in Saki, Oke Ogun Area of the state, has never raised his voice against the killings, raping and destruction of farmlands by Fulani herdsmen.”

Describing President Buhari as the number one threat to the unity of Nigeria, the governor said; “Painfully, because of President Buhari’s nepotism, religious bigotry and favouritism Nigeria is now more divided than ever before, with the unity of the country being threatened.

“The father figure of this country is President Buhari and if his language does not represents unity, there will be agitations like we are witnessing now.

“I therefore reiterate my commitment to the call for full and total restructuring of Nigeria through dialogue and negotiation.

“It is my position that for Nigeria to move forward and in unity; there must be no sectionalism, there must be no oppression and there must be justice and equity. All these cannot be guaranteed by President Buhari as he has continually demonstrated that he is a President for the Northern part of Nigeria only.”

The governor promised to rule Nigeria with fairness when he becomes President, saying; “Unlike President Buhari, I am a complete detribalized Nigerian, who treats all the people of Nigeria equally, not minding tribe and religion. Therefore, my presidency will resolve all issues threatening the unity of Nigeria.”