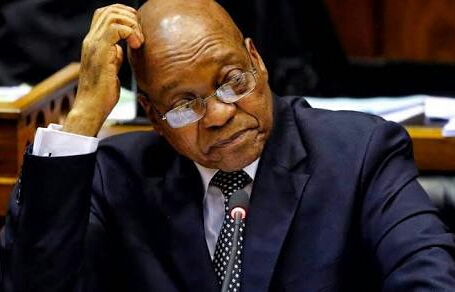 The South African president, Jacob Zuma has been issued a deadline notice to honourable clear himself from the allegations of corruption against him.

You will recall that Jacob Zuma was recently honoured with a gigantic Statue by the Governor of Imo State, Rochas Okorocha.

The National Prosecuting Authority (NPA) told Zuma yesterday that it will only consider new representations on why he should not face corruption charges by the said date.

This was disclosed after the Supreme Court of Appeal (SCA) earlier this month dismissed an application by Zuma and the NPA to appeal a High Court ruling that the 2009 decision to drop 18 corruption charges against him was irrational. The charges related to Zuma’s alleged involvement in the country’s multi-billion rand arms deal.

NPA spokesperson Luvuyo Mfaku detailed the timeline for Zuma’s possible prosecution, including that he has until November 30 to make representations as to why the prosecuting authority should not charge him with corruption.

“The NDPP (National Director of Public Prosecutions) is of the view that, in light of the judgment of the SCA, it appears that any further representations envisaged by Mr Zuma should relate to issues not previously considered,” Mfaku said in a statement.

Share
Facebook
Twitter
Pinterest
WhatsApp
Previous article“It is an insult on Nigerians to say we came into power by deceiving them” APC spokesperson, Bolaji Abdullahi replies GEJ | Trait News
Next articleCourt Grants FG The Right to Forfeit All Funds Held in Bank Accounts not Linked to BVNs | Trait News