HomePOLITICSCrisis in Osun APC as legislative aspirants call for cancellation of primary...
POLITICS 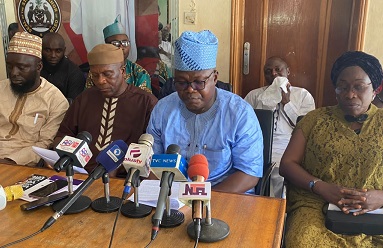 The All Progressives Congress (APC), State and National Assembly aspirants in Osun State have jointly called for the cancellation of the legislative primary elections of the party.

The aspirants described as a sham the primary election held statewide on Friday, May 27, 2022.

The aspirants, including ten House of Assembly and two House of Representatives aspirants, accused Governor Adegboyega Oyetola of impunity and total disregard for democratic principles in the conduct of the primaries.

The aspirants said the direct primaries was conducted without any election material or party documents like membership register and result sheets, among others.

Addressing a press conference on Monday, the aspirants said results of the primaries were not announced at the various ward and local government collation centres by the factional APC Ward Chairmen who were appointed as Collation Officers by Oyetola.

They claimed the result sheet of each of the State and Federal constituencies were kept in the Government House where the ‘Governor’s people’ were allocating figures to their preferred aspirants.

According to the aspirants, the failure of the party leadership to declare a winner of the State House of Assembly and Federal House of Representatives primaries in each constituency was a result of the fraud and manipulation of the results as directed by the Governor.

Reading the text of the press conference, Adeayo, a two-term state lawmaker said, “On behalf of other aspirants to the State House of Assembly and National Assembly positions, we wish to bring to the fore, indeed the attention of the whole world, the charade and sham that Governor Adegboyega Oyetola and his ilk called primary elections in the state.

“An autocratic and dictatorial regime couldn’t do worse in dragging democracy on the floor than what Governor Oyetola and his collaborators have done on the House of Assembly and National Assembly primaries of our party. The late dark goggle general didn’t bring as much odium to democracy as Governor Oyetola.

“Our people were at the various collation centres and nothing was happening until around 5pm when some factional Ward Chairmen from the Governor’s camp surfaced, claiming to be the Presiding Officer for the primary election. These chairmen did not come to the collation centres with any electoral materials like APC membership register, result sheets, e.t.c. They just asked the party members to raise up their membership cards, queue and without any proper accreditation, did the counting, wrote the results on a PIECE OF PAPER and left.

“Even with such fraudulent and reprehensible conduct, our supporters were more than those of our opponents and we had the highest number. In some wards, there was no counting of APC members at all.

“The same scenario was repeated for the House of Representative’s primary which took place on Friday 27th May 2022 and up till this moment, there are no official results for both the State House of Assembly and National Assembly primary elections in Osun.

“May we note that with the high level of impunity and manipulations involved in the process and shenanigans engaged to get rid of us, the joke has now turned on Governor Oyetola’s group, as all its aspirants in various constituencies are laying claims to victory and confirming it with concocted figures aimed to suite their fraud.

“It is unheard of, even a shameful experience, that four and three days after the primaries have been held, the Governor and his collaborators in the party are unable to declare the winner in the contests.

“Therefore, we call on His Excellency, the National Chairman of our party, Senator Abdullahi Adamu to use his good office to correct the current act of impunity and rape of democracy being displayed by Governor Gboyega Oyetola before it is too late.”

The Osun APC House and National Assembly primary elections have been marred with protests and allegations of imposition by members.

Though the election was held on Friday, the results have not been released by the Osun State Secretariat of the party.

Many aspirants also have taken to social media to announce their victory in the polls.