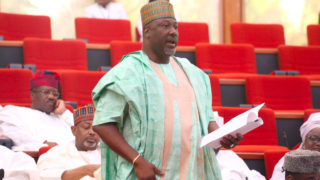 Melaye said the declaration by the Acting President will go a long way to save the people of the state from anarchy.

The Senator also called on the All Progressives Congress (APC) to call the Kogi state Governor, Yahaya Bello to order.

He said that the undemocratic tendencies of the Governor might ruin the work that genuine APC members have done in Kogi state.

On Tuesday, August 1, 2017, while reacting to an attack on members of the Kogi House of Assembly by suspected thugs.

Melaye said “The draconian Idi Amin approach to governance by Yahaya Bello as displayed by his criminally minded hooligans and hired killers in usurping the legislative powers and priviledges of the Parliament is a clear manifestation of satanism.

He said, “We are not in a banana republic. It is manifestly clear now that the acting President must declare a state of Emergency in Kogi State before Anarchy becomes Total.”

“The economic cankerworm and social scavenger called Bello must be tamed before he finishes spending the little political capital left for APC in Kogi. We must not all keep quiet and allow this Stranger destroy the labour of genuine APC members in Kogi.

“We will not allow him to take us back to Egypt. We must rescue Kogi Now”