HomeTHE NATIONEl-Zakzaky: We are ready to sacrifice 21 million members if Buhari govt...
THE NATIONNEWS

El-Zakzaky: We are ready to sacrifice 21 million members if Buhari govt fails to release our leader – Shi’ites 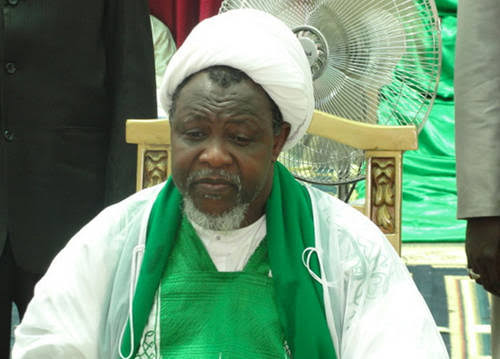 The Islamic Movement of Nigeria, IMN, have vowed to raise terror in Nigeria by sacrificing not less than 21 million of its members if Federal Government failed to release its leader, Ibrahim El-Zakzaky.

The group issued the warning during its protest in Ikeja, Lagos State on Thursday.

Addressing journalists during the protest, the South-West Coordinator of IMN, Mr. Muftau Zakariya, called on the National Leader of the All Progressives Congress, APC, Bola Tinubu, to prevail on Buhari to release it’s leader.

According to Zakariya, the group would not desist from protest until Buhari released El-Zakzaky.

“It’s true that there are 21 million Shi’ites in Nigeria, and if they kill our leader, which country will they have to rule by 2023.

“Buhari got to the office because the National Leader of the All Progressives Congress (APC), Asiwaju Bola Tinubu, assisted him. It was Tinubu that started the movement and spent his money to ensure that the party assumes power. We’re calling on Tinubu, to talk to the President, who is a member of his party to free our leader. If he allows the President to continue to kill our members, there will not be Nigeria in 2023. We’re not happy over the continued detention of our leader.”

This is coming barely 48-hours after members of the groups invaded the National Assembly and forcibly took over the complex and injured six policemen in the process.

The protesters were said to have overpowered security men at the popular Mopol (Mobile Policemen) gate, and entered the second gate.

Soon after they entered, the Shi’ites members started vandalising vehicles that were either coming or going out of the National Assembly. The mayhem forced workers and visitors to scamper for safety.