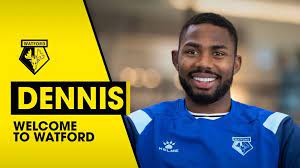 Drew Uyi, the agent to Watford’s Emmanuel Dennis has claimed the player could have been playing for Manchester United or Arsenal.

According to Uyi, the move didn’t happen because of Club Brugge’s asking price in the past.

“Arsenal were interested (in signing Dennis) in the past, Manchester United were also interested, but for Club Brugge ridiculous fee on him.

“They wanted 25 Million pounds, while these clubs were prepared to pay 15 Million,

In the end he joined Watford for 3.4 Million pounds because his contract was running out,” Uyi told The Football Show on YouTube.

Since his summer move to Watford, Dennis has netted six goals for the Hornets.

“He was frustrated at Club Brugge, he was not happy because no young man would be if he were stopped from such opportunities (Manchester United, Arsenal),” Uyi added.