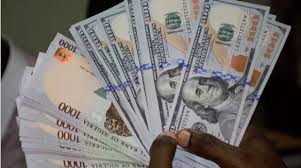 Thursday, 21st October 2021: The exchange rate between the naira and the US dollar closed at N415.07/$1 at the Investors and Exporters window, where forex is traded officially.

Also, naira depreciated against the US dollar on Wednesday by 0.35% to close at N575/$1 compared to N573/$1 recorded as of the close of trading activities on Wednesday, 20th October 2021. This is according to information obtained by Nairametrics from BDC operators in Lagos. Nigeria’s foreign reserve closed at $40.76 billion on Wednesday, 20th October 2021, representing a $377.04 million boost in the reserve position. The nation’s forex reserve increased by 0.93% on Wednesday from $40.39 billion recorded as of the previous day

Trading at the official NAFEX window

The opening indicative rate closed at N413.94/$1 on Thursday, representing a 24 kobo appreciation compared to N414.18/$1 recorded in the previous trading day. This also represents a positive movement in three consecutive trading days.

Meanwhile, forex turnover at the official window dropped by 69.2% on Thursday, 21st October 2021.

According to data tracked by Nairametrics from FMDQ, forex turnover at the I&E window decreased from $334.97 million recorded on Wednesday to $103.16 million on Thursday 21st October 2021.

The cryptocurrency market closed trading activities on Thursday on a bearish note with a decline of 3.14% to close at $2.57 trillion, indicating a loss of $83.37 billion to crypto investors. The bearish movement was largely driven by the decline recorded in the largest crypto by market capitalisation.

Meanwhile, the Bitcoin Strategy ETF, a new exchange-traded fund linked to Bitcoin futures rather than directly to the currency was listed on Tuesday and rose nearly 5% on its first day of trading.

The crude oil market was dominated by bearish sentiments on Thursday as most crude products recorded a decline in their prices. Notably, Brent Crude dipped 1.19% to close at $84.8 per barrel, despite surpassing $86 earlier in the day.

Meanwhile, the market has witnessed significant bullish trades in recent times owing to the surprising drop in crude oil inventory. According to the report from the US Energy Information Administration (EIA), that total crude oil and petroleum products (ex. SPR) stocks slumped 9.81 mmb to 1,228.91 mmb in the week ended October 15. Crude oil inventory slipped 0.43 mmb to 426.54 mmb, compared with a consensus of a +1.86 mmb increase.

Nigeria’s foreign reserve gained $377.04 million on Wednesday, 20th October 2021 to close at $40.76 billion compared to $40.39 billion recorded as of the previous day. The latest increase represents a 0.93% increase in the country’s foreign reserve position.

The nation’s foreign reserve has gained $3.98 billion so far in October, on the back of the $4 billion raised by the federal government from the issuance of Eurobond in the international debt market. The gains recorded so far in the month is higher than the $2.76 billion gain recorded in the month of September 2021, while the recent increase puts the year-to-date gain at $5.39 billion.

I will address forex supply to manufacturers for imports – President Buhari