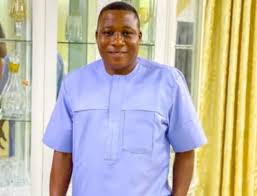 Nigeria Government has stated that it has established a connection between Yoruba nation agitator, Sunday Adeyemo, popularly known as Sunday Igboho, and a firm linked to a terrorism sponsor.

The government said that Igboho has links with a Boko Haram sponsor, Surajo Muhammad, who was sentenced to life imprisonment in the United Aram Emirates on charges of financing terrorism. It also alleged that between 2013 and 2020, Igboho received N127 million from several financiers including a federal lawmaker, although they have been unable to reveal the identity of the lawmaker.

According to NAN, this disclosure was made by the Attorney-General of the Federation and Minister for Justice, Abubakar Malami (SAN), at a news briefing while reading out findings of a Presidential committee set up to investigate Igboho and leader of the Indigenous People of Biafra, Nnamdi Kanu.

Malami said that the findings revealed that Igboho is a director and signatory to a firm – Adesun International Concept Limited – registered on April 23, 2010 which has been linked to a terrorism sponsor.

”Igboho is linked to 43 bank accounts in 9 banks.”

The Minister said the major financier of the fugitive and separatists was found to be a federal lawmaker in the National Assembly.

He said, “A total sum of N127 million was received by Igboho from his financiers between  October 23, 2013 and Sept. 28, 2020 through Adesun International Concept Ltd accounts.

Malami said, “It might be recalled that Abbal Bako & Sons and its promoter Abdullahi Umar Usman are suspects in the on-going Joint Terrorist Financing Investigation.

“Abdullahi Umar Usman is by way of financial transaction connected to Surajo Muhammad (who was sentenced to life imprisonment in UAE on charges of financing terrorism (Boko Haram).

“The report found connections of financial transaction between Adesun International Concept Ltd (belonging to Igboho) and some construction companies and businesses among others.’’

Malami, however, assured that the Federal Government remained resolute in its determination to have a peaceful Nigeria adding that government would do all that was necessary within the context of the legal provisions to ensure that the matter was given the deserved attention and those found guilty would be made to face the wrath of the law.

Sunday Igboho, who is currently in a detention facility in Benin Republic, has been having a running battle with the Federal Government over his agitation for the declaration of a Yoruba nation,

Recall that his home at Soka, Ibadan, Oyo State, Nigeria, was invaded by men from DSS at about 1:30 am on July 1, 2021, leading to the arrest of 12 of his aides with 2 casualties reported, while Igboho managed to escape arrest. He was later arrested in Cotonou, Benin Republic, on July 16, 2021, with his wife, while travelling to Germany and has since then been in detention.