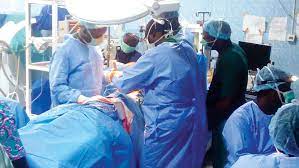 The National Association of Resident Doctors (NARD)has said that the executive arm of government is acting indifference in meeting doctors’ demands which also has frustrated the National Assembly (NASS), forcing it to “take off its hands” from the strike. Trait News reports

NARD said this while reacting to the benefits the meeting between the association and the NASS has had in addressing the demands made by the association to enable it to call off the industrial action.

In an interview with the News Agency of Nigeria (NAN), the NARD Publicity Secretary, Dr Dotun Oshikoya, said that the NASS seemed frustrated and likely “taking off its hands” from the issue.

Oshikoya said that this is because the executive arm of the government was not responsive and playing its role to resolve the issues, stating that the NASS cannot do the job of the executive.

NAN reports that the association has held meetings with the NASS to critically look into the issues raised by the association which triggered the ongoing strike and find ways to address them.

“The way I see things now, it looks like the NASS is taking off its hands from the issue.

“The executive arm of the government is not doing anything to implement our demands and the NASS can only be a mediator and make recommendations; they cannot do their work for them.

“Despite our discussions with the NASS nothing tangible has been done to address the issues that triggered the strike.

“The Federal Government has just been paying lip service in the media to either confuse the public or gain sympathy.

“Nothing concrete has been done. They have just been engaging in bureaucracies but they are yet to solve the problems.

“If the government is very sincere, the ongoing strike should have ended by now. The strike is three weeks old and nothing has been done despite the Memorandum of Understanding (MoU) we signed with it in April,” said the NARD spokesman.

Oshikoya said that three weeks into the strike by resident doctors, the federal government was yet to make any form of payment to doctors’ owed salaries for several months.

He said that the government was also yet to make any commitment as to when the salaries would be paid and other demands met.

“We have realised that the government is insincere as per our demands.

“Our members being owed salaries are yet to see an alert since the strike commenced and the government has also not informed us of when exactly these salaries would be paid.

“They signed an MoU with the Nigerian Medical Association (NMA) that they will not victimise any doctor.

“As I speak to you, however, a circular was issued directing all Chief Medical Directors and Medical Directors of all public hospitals in Nigeria to open a register and institute no-work-no-pay for all doctors.

“Some of our members in the state and federal health institutions are yet to collect between three to four months’ salaries; some are owed nine months or more. With the no-work-no-pay directive, these doctors will not also get their salary for August.

“The government’s only concern now is to stop the salaries of doctors not working when it already owes these doctors salaries spanning several months to a year. ” he emphasised.

Oshikoya however assured that the strike would be called off once the government paid resident doctors’ salaries owed them or concrete and tangible commitment made by the government as to when the payment would be made.

He said “this strike can stop this evening if salaries are paid now. The government claims not to have money to pay our salaries, but they have money to do other things”.

He insisted that without resolving the issues raised by the association, the strike would continue.

NAN reports that some of the demands made by the resident doctors include immediate salary payment to all house officers and an upward review of the current hazard allowance to 50 per cent of consolidated salaries of all health workers.

Other demands are payment of outstanding COVID-19 allowance and payment of death in service insurance for all health workers who died as a result of COVID-19 infection or other infectious diseases in the country.

NARD also insists that salary shortfalls of 2014, 2015 and 2016 owed members in state and federal health institutions be paid.

The association in the last weeks met with the NASS to discuss these issues and find ways to resolving them.

The meetings ended with no concrete solution or measures to address the demands.

The NASS, however, appealed to the Director General of Budget, Federal Ministry of Health and the Head of Service of the Federation to ensure proper arrangements were made in the annual budget to provide for doctors’ salaries and allowances.