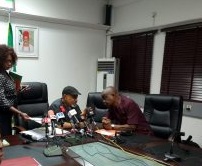 Abuja – Federal Universities to reopen as ASUU Delegates agreed to the Federal Government terms to call off their strike action.

This was revealed in a closed door meeting held between the delegates of Federal Government and ASUU which last more than 12 hours in Abuja. A consensus was drawn by the parties which may lead to calling off the ongoing industrial action by the varsity staffs

The national president of ASUU, Biodun Ogunyemi, told journalists shortly after the meeting that the union is pleased with the new proposal from the FG but needs to consult it members before final decision could be made.

“Now we have some concrete proposal that we will take back to our members for consideration.” he said.

ASUU is expected to communicate decisions to its National Executive Council (NEC) and revert to government within one week with a view to calling of the strike.

On the part of FG, the Minister of Education, Adamu Adamu, iterate that ASUU’s demands have been addressed and the union will get back to the government in a week after consulting with its principals.