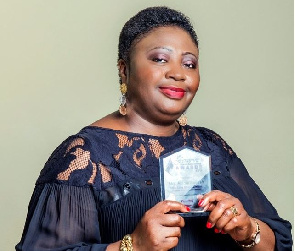 YEN.com.gh has caught sight of a truly inspiring story of a former table-top groundnut seller who has defied all odds to become a banker.

Mrs. Marufatu Abiola Bawuah is not just a banker, but the Regional CEO of United Bank for Africa (UBA), caring for six West Africa subsidiaries of the bank.

What makes her story an inspiring one is the fact that she grew up in an impoverished home.

There were no ready opportunities, however, by dint of hard work, and the support from her uneducated parents, Abiola has risen to the top today.

She engaged in petty trading including selling groundnut on a table-top to cater for herself and younger siblings as she is the first born.

Abiola also had to deal with sexual harassment and was nearly married off at age 13.

In a book, she has authored titled: ‘Chosen from the darkness’, Mrs. Bawuah’s life story is clearly spelt out.

Find below a review of the book as sighted by YEN.com.gh on Myjoyonline.com.

“Earlier in July 2018, The Africa Report named Mrs. Marufatu Abiola Bawuah as one of Africa’s 50 Influential Women in Business, in a list that also included other highly accomplished women, including an oil billionaire.

Abiola is the first Ghanaian to have been appointed as MD/CEO of United Bank for Africa and also the first women to have held that position.

She has collected an enviable quantum of awards in the recent past: ‘CIMG Marketing Woman of the Year for 2016,’ ‘Finance Personality of the Year Award,’ ‘Woman of Excellence in Finance,’ ‘Exemplary Leadership in the Banking Sector’ and many many more.

Mrs. Abiola Bawuah is currently the Regional CEO of United Bank for Africa, in charge of six West African subsidiaries of the bank.

She turned 50 on September 25, 2018, and had a grand launch of her memoir and birthday bash at the Accra International Conference Centre on September 29.

The well-attended event had former presidents John A. Kuffour and John D. Mahama in attendance, as well as Tony O. Elumelu, the Nigerian Economist and Chairman of the UBA Group who has pledged millions as seed capital to help raise African entrepreneurs.

The memoir titled ‘Chosen from The Darkness,’ starts with an account of an incidence in her earlier working life that is resonant with the #metoo movement – a case of sexual harassment and potential sexual assault.

It then keeps that narrative on pause and the reader in suspense as it moves on to lay the foundation for why she, from a community that looked down on girl-child education, was even allowed to enter a classroom and eventually start a corporate life.

Her prospects at an early age were grim – her uneducated father was what we call a ‘vulcanizer’ – fixing mostly car tyres and pumping them when they were deflated.

He added another layer to his business – dealing in used tyres – but even that would collapse eventually.

Her mother got by as a trader. With an increasing household to feed and take care of (including the children of a friend), many responsibilities got transferred to Abiola as the firstborn, and it is impressive how she combined taking care of her siblings with her education.

She grew up interacts in significant ways during her days at Achimota School. Challenges came her way from different directions, and she had to learn to navigate quickly or succumb to despair and defeat.

Her climb up the corporate ladder has also been far from smooth. Banking was not at all on her radar when she bravely completed university (while also supporting a large number of siblings to continue their education as well).

There were moments in her past where the sometimes unrelenting pressure of her circumstances make you wonder why she still held on with poise and determination.

When she reflects on them later in the book, she asserts frankly that the pain, the challenges, and the harsh realities made her sometimes feel like she was cursed. She also provides insights into what values helped her persevere.

This candid, inspiring and humorous memoir is truly a treasure for the struggles, the difficulties and the challenges that this outstanding woman has had to contend with, and the mindset, the attitudes and the work ethic that she has used to conquer those mountains.

Abiola, a naïve young girl who was to marry at 13 and probably have zero education, has defied odds, gotten an education, played the corporate game, become good at it and mastered it.

Now the results are obvious, and the accolades have not stopped. The book is presently available on Amazon in e-book format (Kindle) and paperback format.

It’s also available at UBA branches nationwide and will soon be in major bookstores in Ghana.

The youth are our future. This book is for them – to inspire them and also to be used to raise funds to support the Abiola Bawuah Foundation’s plan of providing scholarships, mentoring and other much-needed support for some of our vulnerable girls with challenging circumstances similar to what Mrs. Bawuah grew up with.”

BOOK REVIEW: CHOSEN FROM THE DARKNESS 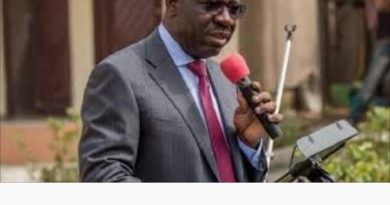