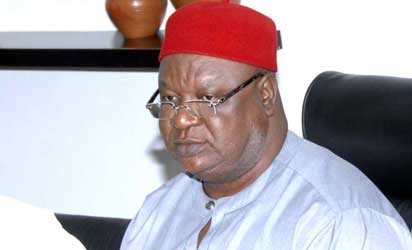 Economic and Financial Crimes Commission, yesterday, exposed how former Secretary to the Federal Government, Senator Ayim Pius Anyim, used firms in which he had interest to award contracts to the tune of N13 billion from the Ecological Fund Account domiciled in his office.

The anti-graft agency, which arrested Anyim, a former Senate President, said its operatives were also questioning the Ebonyi politician on what he collected the sum of N520 million from the Office of the National Security Adviser, Col. Sambo Dasuki, on the eve of the 2015 Presidential election, in which his part of.

The arrest, according to the source, took Anyim by surprise as the EFCC team, armed with a Warrant, immediately executed a search on his property during which they recovered documents relevant to the investigation.
Trait News learnt that Anyim who was still being questioned as of press time, might spend the weekend with his interrogators over allegation of abuse of office, misappropriation of public funds and money laundering.