HomeNEWSFr Mbaka How we Restored Peter Obi to Govt House After he...
NEWSPOLITICS 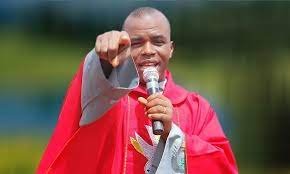 Enugu Catholic priest, Rev. Fr. Ejike Mbaka has claimed that he played a major role in keeping the 2023 Labour Party presidential candidate, Peter Obi in the Anambra State government house during his (Obi) tenure as Governor of the state.

Mbaka, the founder of Adoration Ministry, Enugu made the claim on Wednesday during a sermon at the adoration ground.

According to repoter recalls that Obi, a former Governor of Anambra State, who took over office on March 17, 2006, was impeached by the state House of Assembly after seven months in office.

Obi had several times claimed that he was impeached by the state lawmakers for allegedly refusing to mismanage the state’s fund.

But Mbaka who believes that the LP candidate is stingy and would not emerge as President Muhammadu Buhari’s successor in 2023, said Obi failed to reciprocate his gesture of aiding him to retain the governorship seat despite the impeachment.

He said, “Obi is my friend. When he was chased out of Government House, he knew the role I played to bring him back, but how did he pay me back?

“Night meetings we attended to bring him back, ask him, ask Eselu Uga, ask Archbishop Anikwenwa, they know where and how we did it and he was brought back.

“Ask Peter since then what he used to reward Adoration. If you like Peter Obi, tell him to come and ask for forgiveness. Let him come and redo what he did. There is an altar of God he blasphemed; he defiled an altar of God, the Holy Spirit”.