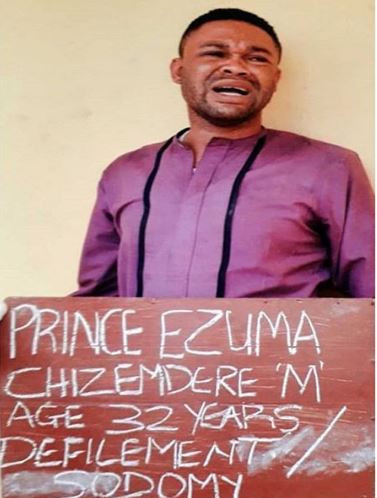 He was arrested at his residence after an informant notified the police he had resurfaced, three months after he was declared wanted. It was gathered that the suspect climbed his ceiling where he hid for over two hours to evade arrest when detectives stormed his home few days ago.

The suspect was declared wanted after an alleged male prostitute, Prince Chinecherem, was arrested and charged to court after a 16-year-old victim, Anthony Ikem, made revelations that implicated them.
.

Ikem, who was found sneaking out of the suspect’s home with a polythene bag containing used condoms and other items, was accosted by neighbours and he confessed he was one of several sex partners of the pastor. Ikem also confirmed that the Ezuma usually gave them to service some of his male clients including VIPs. The teenager was taken to the hospital for checks and it was discovered he was HIV+.

It was gathered that some residents of the community were worried he was corrupting their male children and initiating them into the club, hence, their keen interest to see that he was arrested and prosecuted.

Findings revealed that Ezuma was moved to the Gender Section at the Police Command Ikeja, yesterday afternoon, following pressure from certain quarters in the division to release him.

In his confessional statement to the police, Ezuma claimed he usually paid the boys N2,000 for sex. Investigation showed that he brought about 15 boys into his apartment where he forcefully penetrated them all through the anus. “The reverend confirmed he is HIV+ and has been receiving treatment for over three years. So, he knew he was HIV positive and still infected his victims and clients with it,” said a source.