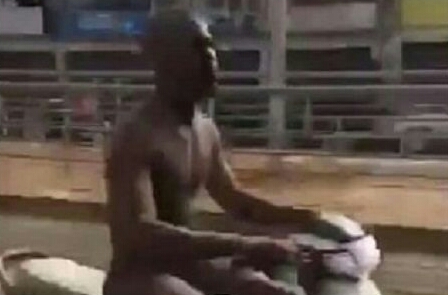 The chief of Tamale, Naa Alhassan Dawuni is reportedly very angry after a video surfaced online which shows a young man roaming the streets of Tamale on a motorbike without his clothes on last Saturday.

It is said that the monarch had been fuming in anger after the clip was shown to him by palace elders who watched it.

The chief immediately ordered a relentless manhunt for the teenager who has fled from the city after his parents who he summoned on Sunday failed to disclose his whereabout.

In the video, the young man is spotted speeding down the Nyohani road towards the Abedi Pele roundabout completely unclothed, while another person sitting in a private vehicle, is seen filming the movement on phone.

Many who watched the entire clip said the naked rider stopped over and bought a meal at ‘Fatawu Bicycle’, a popular eatery in town.

Reports say the person in the car filming the incident made a bet with the motorbike asking anyone who could strip off his clothes and ride on the streets to keep the bike.

Some say prize of the bet was GH50 which the youngman agreed and took the challenge and audaciously sped around the busiest streets in the metropolis appearing all naked.

The secretary of chief Sabaha naa Abass Salifu said father of the teenager claimed his son was under spiritual attack explaining he has been taken to Mankarigu in the North Gonja district to see a native doctor.

According to the secretary, the chief angrily rejected that explanation and ordered him to bring the teenager to his palace within a week or face direct consequences for his son’s act.

He said the teenager when arrested would be used as “scapegoat” to deter others from indulging in acts that violate accepted standards of behaviour.

Sabaha Naa also said if what happened was a plot by homosexuals to taste the reaction of northerners then the punishment that awaits the teenager would shock the entire human rights community and any attempt to muzzle or restrict his authority by these bodies will be fiercely resisted.

“Our boys went to the house two, three times today just to catch the boy and bring him but we didn’t get him. We want to send a signal to them, and if the issue of gayism or whatever, people are testing our pulse here, we will send a very loud and clear signal that No, at all. Maybe these are some of things that they could push for us to see what the reaction of Tamale people will be.”

“But the chief of Tamale is saying that he would send a signal to everybody. When we get him, you people will be invited to the place. We are going to do it in a public glare for others to see and know that tradition still exist here, irrespective of what the so called human rights people will say”, Alhaji Abass fumed.