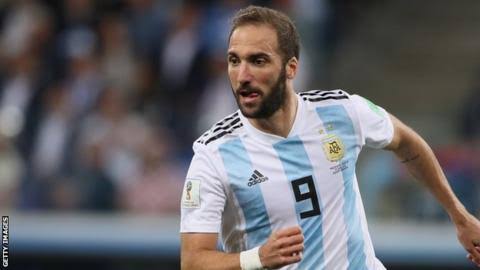 Argentine professional footballer, Gonzalo Higuain who plays as a striker for English club Chelsea, on loan from Juventus, and the Argentina national team has announced his retirement from international football with Argentina

The 31-year-old, who joined Chelsea in January on a loan deal from Juventus, scored 31 goals in 75 appearances for Argentina. He last match was against Nigeria in the World Cup last June.

Explaining his decision in an interview with Fox Sports, Higuain said: ‘My time with Argentina is over. Thinking things through in-depth, my time is up.

‘To the delight of many, now I will only look at it from the outside. I have spoken to (manager Lionel) Scaloni and told him my point of view.

‘I’ve made the decision because I want to enjoy my family, I want to spend time with my daughter, and at the same time, I feel that I gave my country everything I could.’

Higuain, who has scored three goals in 10 appearances since joining Chelsea towards the end of January, added: ‘I’m fully focused on my commitment to Chelsea.

‘The Premier League is amazing and I really want to enjoy it. It’s very competitive indeed.’