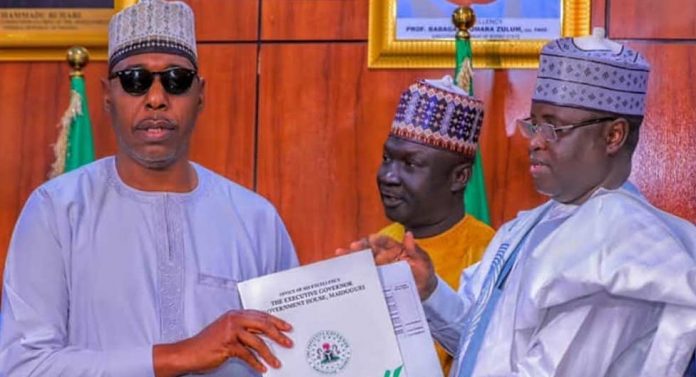 The Borno State Governor, Babagana Zulum has signed the state’s N269.7 billion budget into law for 2022 with about one per cent increase. According to him, while capital expenditure takes at N172.53 billion, recurrent takes N95.4 billion.

Presenting the bill for assent, yesterday, in Maiduguri, House of Assembly Speaker, Abdulkarim Lawan, disclosed: “The House Committee on Appropriation and Standing Orders, in consultation with various Ministries, Departments and Agencies (MDAs), adjusted the budget size.”

The budget adjustments, according to him, were made to capture five areas of the appropriation bill for signing into law.

On the implementation of the budget, Zulum said: “The law is very clear as regards expenditures without budgetary provisions,” warning members of the State Executive Council (SEC) to be careful.”

Also, Governor Zulum has signed the Child Protection and the Violence Against Human Prohibition bills into law. According to him, the implementation of Act will assist Borno residents in their daily activities.

Signing the bills, yesterday, at the Government House, Maiduguri, he said: “The Child Rights Act was amended in accordance to our culture, norms, religion and traditions.”

He noted that some clauses were “omitted and inserted” after due consideration of the House of Assembly to pass the two bills into law. On how the bills were passed, the Attorney General and Commissioner of Justice, Kaka Lawan, disclosed: “We sat down to draft the executive bills on the instruction of Governor Zulum. They were sent to the House of Assembly for deliberation, as they affect their norms and traditions.”