HomePOLITICSGovernor Obiano: Anambra indigenes made Lagos what it is today | Trait...
POLITICSTHE NATION

Governor Obiano: Anambra indigenes made Lagos what it is today | Trait News 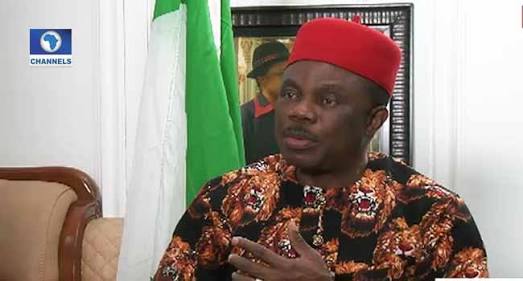 The Governor of Anambra State, Willie Obiano who got re-elected into office for a second term last Saturday, says Lagos State is what it is because of the impact of the indigenes of Anambra state residing in the state.

He stated this during an interview granted on Channels TV.

Governor Obiano said: “We have very rich Anambra people all over the world. Anambra made Lagos what it is, whether they want to accept it or not,  the taxes that are paid are mostly by Anambra people”.

The governor noted that security is a major issue in the state and that for this his second term in office, he would keep himself awake so that residents of the state can sleep with their two eyes closed.

“Before I came into power, security was an issue. I came, I saw, I conquered and it’s not a static thing. Security is continuous, so we are moving and we are going to put in more efforts to ensure that the next four years is even far better than they have seen it now. I’ll keep awake so that all Anambra people and those living in Anambra can sleep with their two eyes closed. I’m not going to drop the ball, my eyes are on the ball.”

“I am working hard to ensure that at the end of my eight years, governors coming after me will not have to depend on FAAC to run the state and that’s what I’m doing in investments. Security is the greatest thing that I have done and it is bringing a lot of people in. The greatest thing we want to do is to emulate what the Israelis have done.” He said.