A letter which condemns homosexuality has been found in the suburb of Sydney from someone claiming to be ‘Jesus’.

The letter, found close to Oxford St, the hub of Sydney’s gay night-life and venue for the city’s iconic Mardi Gras parade, laments Australia’s recent legalisation of same-sex marriage and blames gay Australians for a variety of natural disasters, including the current drought that has been causing misery for Australia’s agriculture industry. 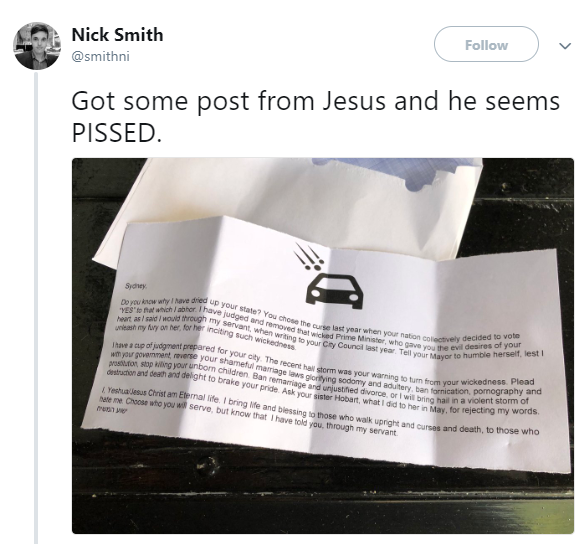 The author of the letter blamed politicians, who voted for same-sex marriage following a public referendum, for “inciting such wickedness”.  The letter not only condemns same-sex marriage but also threatens the city and wider area with destruction and death.

Do you know why I have dried up your state? You chose the curse last year when your nation collectively decided to vote “YES” to that which I abhor. I have judged and removed that wicked Prime Minister, who gave you the evil desires of your heart, as I said I would through my servant, when writing to your City Council last year. Tell your mayor to humble herself, lest I unleash my fury on her, for inciting such wickedness.

I have a cup of judgment prepared for your city. The recent hailstorm was your warning to turn from wickedness. Plead with your government, reverse your shameful marriage laws glorifying sodomy and adultery, ban fornication, pornography and prostitution, stop killing your unborn children. Ban remarriage and unjustified divorce, or I will bring hail in a violent form of destruction and death and delight to brake your pride. Ask your sister Hobart, what I did to her in May, for rejecting my words.

I Yeshua/Jesus Christ am Eternal life. I bring life and blessing to those who walk upright and curses and death, to those who hate me. Choose who you will serve, but know that I have told you, through my servant.