The opposition Peoples Democratic Party, PDP,  challenged President Muhammadu Buhari to open up on the “declaration by Finance Minister, Mrs. Zainab Ahmed, that the policies of his administration were hurting the nation and destroying investor- confidence in our economy.”

The party said the declaration by the minister was a vindication of its stand that the Buhari administration was “responsible for the nation’s economic woes and expressed dismay that President Buhari has kept mum on the issue since the minister made her declaration last week.”

A statement by PDP’s spokesperson, Kola Ologbondiyan said, “Though the minister particularly alluded to the administration of the colossal fines imposed on MTN Nigeria and four banks, available data showed that the All Progressives Congress (APC)-led government has been subjecting businesses to very harsh and punitive policies, leading to the dearth of both domestic and foreign direct investments and its attendant economic hardship on the citizenry.

“We had always alerted the nation of the negative impact of the harsh economic policies, high-handedness and vindictiveness of the Buhari administration on investors. This is in addition to heavy and multiple taxations, import and foreign currency restrictions, clampdown on free trade, corruption and avoidable flops, which have continued to scare investors away from our country.

“Today, investors in key sectors are pulling out their interests, foreign revenue is dwindling by the day and our economy has continued to dip under President Buhari, with no hope in sight.

“Only last month, the same Minister of Finance alerted that the nation was facing revenue challenges; a development that stems directly from the harsh policies of the Buhari administration, coupled with its incompetence and lack of creative ability to engage in the global market and run a productive economy.

“We invite Nigerians to hold President Buhari responsible for the economic disaster and the hardship that our nation has faced in the last three and half years.

“Our party restates that if President Buhari had heed wise counsel to accept his incompetence and hands off economic issues, end corruption in his Presidency and allow better hands to manage the economy, our nation would not be in the quagmire we are in today.

“We, however, urge Nigerians not to despair as it has succeeded in throwing up a very credible, visionary and result-oriented Presidential candidate in Atiku Abubakar, in line with the determination to open a new era of economic prosperity and national cohesion under the PDP, come May 29, 2019.” 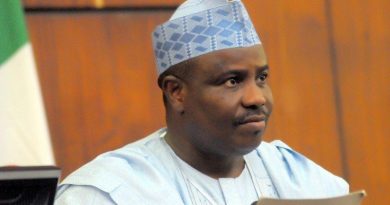