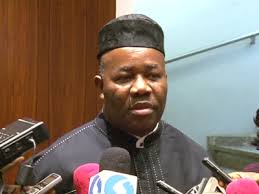 The woes of former Senate Minority Leader, Chief Godswill Akpabio has been further compounded with seizing of his International Passports and other travel documents by the nation’s anti-corruption agency, the Independent Corrupt Practices and Other-related offences Commission, ICPC.

A major stir occurred during the brief ceremony at which the medical director of the hospital Dr. Mary Udoh received the equipment from the ICPC.

Dr Udoh while fielding questions from journalists was vociferously interrupted and attacked by the personal assistant to Senator Akpabio on General Duties, Mr Emmanuel Inyangetoh.

Inyangetoh was seen swearing at the journalists for daring to elevate ICPC instead of Senator Akpabio, the mastermind of the project.
“Was ICPC the donor, did they purchase it, answer me, is ICPC the donor?” Inyagetoh ranted.

The anti-corruption agency currently on a nationwide campaign to recover public assets diverted for personal use, had on a tip-off, stormed a private firm, Semek factory in Ukana, Essien Udim allegedly owned by Senator Akpabio, but managed by his immediate younger brother, Nsentip Akpabio.

The agency operatives recovered one unit of dialysis machine and a generating set meant to have been supplied at the Government Cottage Hospital in Ukana, Essien Udim since March 2018.

Speaking with newsmen, ICPC Commissioner in the state, Mr. Olusola Shodipo who handed the recovered equipment to the management of the hospital, told newsmen that available records show that the medical equipments were 2018 constituency projects for the Senatorial district of which the Government Cottage Hospital, Ukana was the direct beneficiary.
He wondered why the Senator would divert a constituency project meant for the use of his people to a private building.

The ICPC reveals that 3 dialysis machines were purchased for delivery to the hospital as contained in available records, but expressed surprise that instead of delivering the equipment to the beneficiary, it was diverted to a factory premises where only one unit of dialysis machine was however recovered.

The ICPC commissioner in the state, Mr. Olusola Shodipo handed the items over to the medical superintendent of Ukana Cottage Hospital, Dr Mary Paulinus Udoh, on behalf of the commission.

Reacting to the development, some APC supporters came out to say that the investigation is nothing short of a gang-up by the cabal to dwarf the towering profile of the former governor, and enlist him the President’s black book.