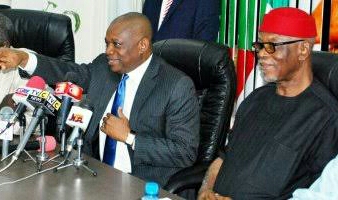 Former Governor of Abia State and a chieftain of the All Progressives Congress in the state, Chief Orji Kalu, has affirms that Igbo can be sure of producing a president in 2023 if they support the re-election bid of President Muhammadu Buhari, Punch reports.
Orji Kalu stated this as a wake up call for the igbo nation to put their house in order and learn from their past political experience. He said that the “future of the Igbo in Nigerian politics is brighter now than it has ever been in the past with the APC.”
Kalu while speaking in Umuahia, the state capital on Sunday, iterated that producing an Igbo president “is a task every true Igbo indigene must key into and the APC is the best platform to achieve the dream.”
According to him, “The future of Ndigbo is the brightest today in the APC. Once Buhari finishes his second tenure, I’m assuring you that either I or any other Igbo man stands a better chance of becoming the president of Nigeria. The right thing to do is to work for the Presidency.
“We don’t need any other thing than the office of the President. If you see what I have done in our villages as governor, you will know what will happen if somebody like me becomes the President; you know that the entire Nigeria will be developed. The future is very bright and Ndigbo will enjoy being in the APC. That is why we are working very hard to win the Anambra State election and will win the state.
“It is possible to have Orji Kalu in Aso Rock, if I’m alive and in good health. I’m very capable to be President because I understand the macro and micro-economics of Nigeria, I don’t even see any Nigerian more capable than I’m to run for the office and work for the people.”
He said that the APC-led government was already reconstructing the Uzuakoli/ Bende Ohafia Road in the state through his intervention.
“When I was governor, I was busy maintaining that road; it is a state government road. But when I left office, it was overlooked and the road became deplorable. So I appealed to the Federal Government for an intervention on that road and they are doing rehabilitation work now.
“The rehabilitation is not being done by any member of the National Assembly; it was by my request.  I told the federal authorities that I can’t go to my village anymore and I’m a member of the ruling party, because I had once spent over five hours on the road because of its deplorable state. I showed Mr. President the pictures and he ordered for immediate rehabilitation of the road.
“We are doing the road to help the people, so that our people can be happy and stop working on their vehicles all the time. That’s what good governance is all about,” Kalu said.
Share
Facebook
Twitter
Pinterest
WhatsApp
Previous articleRivers State Scholarship Students Ambush Gov. Wike in London, Demand The Payment Of Their School Fees and Allowances | Trait News
Next articleFraud: Three alleged hackers of Lagos Assembly Speaker Mudashiru Obasa’s Facebook account face N9.1m theft charge | Trait News