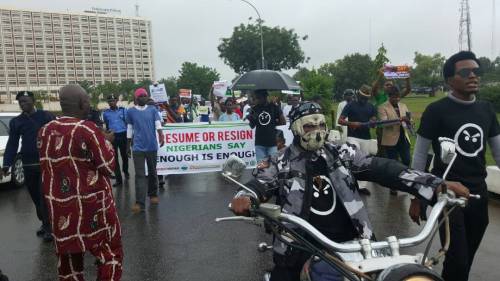 The agitation for President Muhammadu Buhari’s impeachment has continued to deepen as Nigerians seem to no longer be able deal with mere reports suggesting that the president is recuperating fast.

Latest in the series of calls for the President Buhari’s resignation or impeachment is that from a group under the aegis of Ijaw People Development Initiative (IPDI).

The IPDI, in a statement on Tuesday, threatened to flood the streets of Abuja if the National Assembly fails to impeach the president.

National President of the IPDI, Comrade Austin Ozobo, demanded in Warri that Acting President Yemi Osinbajo be declared president as the president appears to be incapacitated.

“There’s no two ways about it. So, senate president cannot be president on this ground. The Vice President is coming in as president of this country.

Ozobo said,” Charly Boy is in order. What he did is lawful and we are in support of it. It shouldn’t be only Charly boy, every reasonable or every well meaning Nigerian should embark on this because we hope to achieve something.”