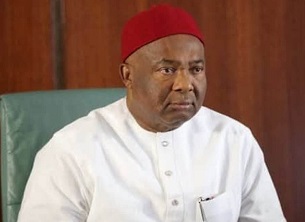 The Indigenous People of Biafra, IPOB, on Friday, charged the Governor of Imo State, Hope Uzodinma to facilitate the return of 500 youths allegedly arrested in the State and taken to Abuja.

IPOB said Uzodinma should urgently facilitate the return of these youths before it loses its patience.

Emma Powerful, the spokesman of IPOB, lamented that Uzodinma invited security agents to arrest about 500 Biafra youths about one year ago, and their whereabouts remained unknown.

In a statement by Powerful, the group insisted that the Governor would be held responsible if anything happened to them.

The statement reads partly: “This is also one year that Hope Uzodinma and his APC party invited military to kill innocent citizens in Imo State and they arrested and abducted many people who they ferried to Abuja. We are also yet to see them.

“They abducted over 500 Biafra youths in Imo State since last year, and we want those youths back for prosecution if they think they committed any crime.

“We gathered through intelligence that those youths were actually being brought back from Abuja to Imo State but unfortunately Nigeria security agents who were escorting them executed them along the way of Abaji and Lokoja in Kogi State.

“We are about to exhaust our patience. Hope Uzodinma should please return those youths before we lose our patience.

“Hope Uzodinma should be held responsible if anything untoward happens to our comrades. He should not expect to conduct his daughter’s traditional wedding in Abuja while the Igbo youths he aided their abduction were executed by security agents. The spirit of those youths won’t allow him go on cerebration spree after making many innocent families childless.”