HomeTHE NATIONInsecurity: I will crush all terrorists – Buhari assures Nigerians
THE NATION

Insecurity: I will crush all terrorists – Buhari assures Nigerians 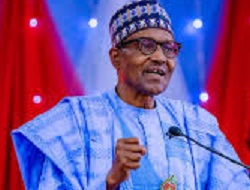 President Buhari said the Nigerian Armed Forces, under his watch, will crush terrorists and criminal gangs operating in Kaduna State and across the country.

The president’s latest promise is contained in a statement signed by his spokesman, Garba Shehu on Friday.

The President said, ‘‘I wish to assure the people and government of Kaduna State that the Federal Government is doing its utmost to contain and crush the terrorists that have been menacing our citizens and their property in parts of the country.

‘‘On behalf of the Federal Government, I commend the efforts of the Kaduna State Government to respond to the demands of development.

‘‘The relationship between our tiers of government represents an instance of successful collaboration between the national and state governments for progress, peace and prosperity.

‘‘I urge Malam Nasir El-Rufai to push on and not relent in his efforts to accelerate change and progress in Kaduna State.”