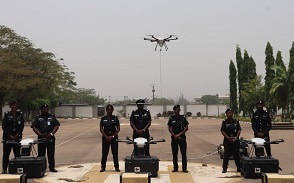 This is coming a few days after the United States, United Kingdom, Canada and other countries alerted their citizens of impending terrorist attacks in the nation’s capital, Abuja.

According to the statement, the three newly acquired UAVs are rotary-wing aircraft that have the capacity to fly up to an altitude of 1, 000 feet.

The police boss directed the immediate, and strategic deployment of the drones based on necessity, noting that three more UAVs of the same specifications are still expected to arrive in the country in the shortest possible time.

The IGP, who reiterated the constant deployment and judicious use of UAVs, ordered a total clampdown on non-state actors and criminals in the country.

He similarly warned criminal elements causing havoc across the country to turn over a new leaf.

US Court Sentences Hushpuppi To 11 Years In Prison