According to her, “Buhari’s All Progressive Congress (APC) and Atiku’s Peoples Democratic Party (PDP) are Siamese twins of failure and destruction.”

But, reacting, Special Adviser to Buhari on Media and Publicity, Femi Adesina on Channels Tv said Ezekwesili’s opinion will not determine who would be the next president in 2019.

Adesina noted that the 2019 election will be a contest between ‘light and darkness.’

According to him, “It is within Ezekwesili’s democratic right to compare Buhari to Atiku but by February next year, we would know who is running genuinely and who is a pretender.

“What we know is that the contest is ahead and going to be a contest between light and darkness.

“2019 is going to be a contest between a man whose life is plain and transparent and a man who you can’t say where he got ‘this and that.’

Speaking on predictions from Economic magazine and United States of peace on 2019 election, Adesina added that predictions would not determine the winner of 2019 election but votes from Nigerians.

“Economic magazine; it is not an endorsement for 2019 but just an analysis, Also same with the United States of Peace forecast.

“They are all forecast outside the country, only Nigerians’ vote will determine the winner of 2019 election. Do not forget that the same Economy magazine said Hilary Clinton would defeat Trump but she lost,” Adesina added. 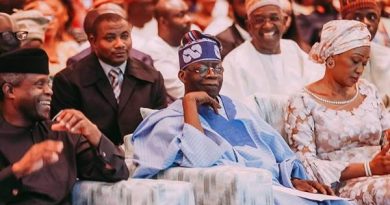