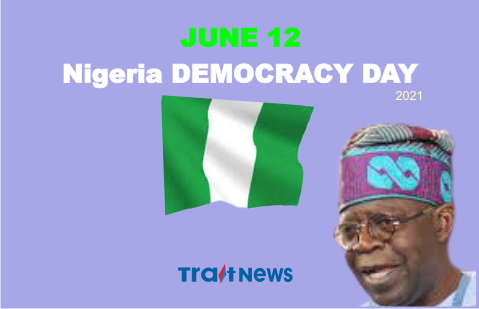 Tinubu made the call in a congratulatory message to the nation on Friday.

He urged that in spite of the challenges Nigerians were going through, they must stand for democracy.

“Democratic good governance offers the only reasonable solution to the challenges confronting Nigeria.

The former governor of Lagos State also urged Nigerians to stand against whatever could hinder democracy.

He urged them to stand against those engaging in insurrection and violence as well as those trading in bigotry and hatred.

“We contend against those who would render the people ignorant and poor.

“We celebrate Democracy Day not only because we have come far but to help give us the social fuel and encouragement to continue onward because we have farther to go and even greater things to achieve as one nation and one people,” Tinubu said

The APC leader urged Nigerians to remember MKO Abiola whose victory in the June 12, 1993 Presidential Election was ‘stolen’.

He said: “Abiola remained steadfast and surrendered his own life so that we all might enjoy the democratic victory that was taken from him.”

TInubu said that without Abiola’s historic efforts and sacrifices, June 12 would not have been declared the nation’s Democracy Day.

He urged Nigerians to remember others who sacrificed so much to bring democracy to Nigeria.

“We best honour these people not by reciting their names but by injecting the spirit and hope of democracy into our words and deeds.

“In becoming better democrats, we also become better at being Nigerians.

“I wish all of you a meaningful and happy Democracy Day,” he said.

The News Agency of Nigeria (NAN) reports that Nigeria now marks its Democracy Day on June 12 annually instead of May 29.