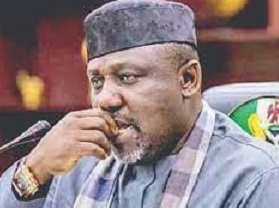 Rochas Okorocha on Friday predicated his bail request on the ground that he is a presidential aspirant on the platform of the All Progressives Congress, APC, and that his political ambition would be jeopardized unless granted bail.

The bail application was filed before Justice Inyang Eden Ekwo and would be ruled upon any moment from now.

Incidentally, Okorocha has been slated for arraignment on N2.9 billion money laundering charges before the same judge twice but refused to honour the court invitation.

EFCC operatives swooped on his Abuja residence three days ago and effected his arrest and detained him to ensure his appearance in court on Monday, May 30 to take his plea in the fraud charges.