Publisher of DAILY NIGERIAN, Jaafar Jaafar, has been invited by the Kano State House of Assembly on Thursday to appear a panel investigating the authenticity of Ganduje bribe-taking video clips published by the online newspaper.

In a letter dated October 18 and signed by the secretary of the committee, Mujtaba Ameen, the House invited Jaafar to appear before the committee on Thursday, October 25.

According to Daily Nigerian, ‘our lawyers are currently studying the Assembly’s invitation letter and will write a reply as soon as possible;.

Recall that on Monday, the Kano House of Assembly opened probe on the bribe-taking videos of the state governor, Abdullahi Ganduje, published by the online magazine. Raising a matter of urgent public importance on Monday, a member representing Warawa Constituency, Labaran Madari, said the assembly should investigate the authenticity of the video and take measures. 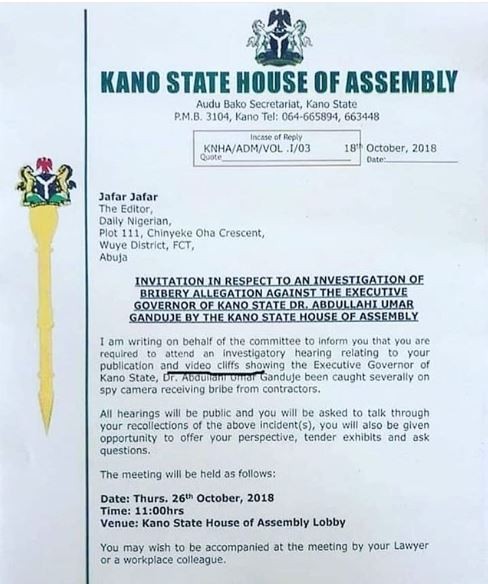