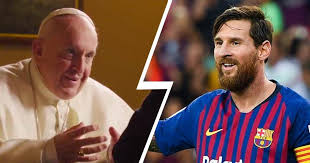 Catholic Pontiff, Pope Francis has called for calm in comparing his Argentine super star footballer, Lionel Messi, to God because of his special talent football.

The clergyman made the statement while being interviewed by Jordi Evole in La Sexta and the conversation is detailed below.

Jordi Evole: You know when both. Is it sacrilege to say the Messi is God?

Pope Francis: In theory, it is sacrilege. You can’t say it and I don’t believe it. Do you believe it?

Pope Francis: I don’t [laughs]. People can say he is God, just as they may say ‘I adore you’ but only God can be worshipped. Those are expressions from people. ‘This is a God with the ball on the field’ is a popular way for someone to express themselves.

Jordi Evole: But he plays well doesn’t he?

Pope Francis: Of course, he is very good, but he isn’t God.