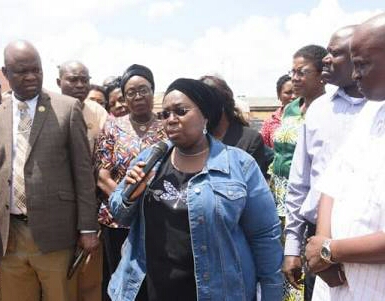 A middle-aged man, Adamu Aminu was on Friday arraigned before an Ebute-Metta Magistrate Court for fraudulently collecting N1million from an unsuspecting victim for a bogus orphanage falsely claimed to be owned by Lagos State Deputy Governor, Dr Idiat Oluranti Adebule.

Aminu (45), who was arraigned by the Lagos State Government on a four-count charge before Chief Magistrate Oluyemisi Adelaja, was said to have perpetrated the crime sometime in August in Agege area of the State.

In count one, the defendant (Aminu) allegedly conspired with others now at large to commit felony to wit obtaining money by false pretence, an offence contrary to and punishable under Section 411 of the Criminal Law Cap C17, Vol 3, Laws of Lagos State, 2015.

In count two, the defendant and others at large “Sometime in August 2017, at 1015 hours at Agege, Lagos State in the Ikeja Magisterial District, did fraudulently obtain the sum of One Million Naira only from one Bright Obed (M) on the pretence of soliciting for funds for a bogus orphanage which you falsely held out to be set up by the Deputy Governor of Lagos State, Her Excellency, Dr Idiat Oluranti Adebule and thereby committed an offence contrary to Section 311 (1) (a) of the Criminal Law Cap C17, Vol 3, Laws of Lagos State, 2015.”

In counts three and four, the defendant alongside others now at large, were accused of conspiring to impersonate a public officer and unlawfully postured as the Lagos State Deputy Governor by calling and sending SMS on a mobile number 09064583091 to the public as the said Deputy Governor contrary to and punishable under Sections 380 and 411 of the Criminal Law Cap C17, Vol 3, Laws of Lagos State, 2015.

After the charges were read to the defendant, he pleaded not guilty while his lawyer, Mrs Uzuomaka Nwafor applied for bail on liberal terms.

Nwafor hinged the bail application on the ground that the crime which the defendant was charged with, is bailable and that he (Aminu) was presumed innocent until otherwise proven.

Responding, the prosecutor, Mr Rafiu Aroyehun, an Assistant Director with the State’s Ministry of Justice, urged the Court to refuse the bail application on the ground that the offence which the defendant allegedly committed was a serious crime.

He said investigation into the crime was still ongoing, with police in the process of tracking down other suspects, but that the defendant was hurriedly charged to court in view of the provision of the Constitution as to number of days to detain him in custody.

“Though the offence is bailable but its seriousness is basically the reason for contesting the bail. The defendant ought to have been arraigned with others who are still at large and the investigation to arrest those on the run is ongoing,” Aroyehun said.

In her ruling, Magistrate Adelaje granted bail to the defendant in the sum of N300, 000 and two sureties in like sum.

One of the sureties, according to the Court, must be resident within the defendant’s neighbourhood, while the other surety must show proof of employment with a reputable organisation.

The surety must also be resident within court’s jurisdiction, while both sureties must provide evidence of tax clearance.

Also, the details of the sureties must be verified by the prosecution, while the defendant is to remain in custody pending the perfection of his bail conditions.